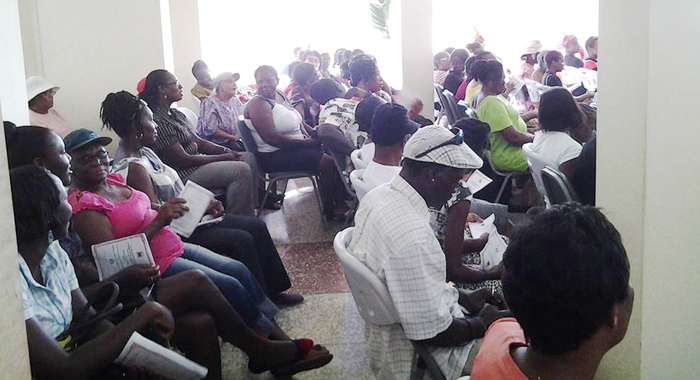 Persons at the ceremony in Barrouallie on Monday. (Photo: Richard Browne/Facebook)

The Government on Monday presented instruments to 185 persons in the Central Leeward town of Barrouallie to allow them to purchase lands at 10 cents per square foot.

Some of the families have been living on the lands for as long as 80 years.

The 612,460 square feet of land in Glebe Hill originally belonged to the Anglican Church but was conveyed to the Christian Council in 1983.

The Government paid the Christian Council 50 cents per square foot for the land (a total of (EC$ EC$306,230), a price significantly below the market price of EC$3 to EC$5 per square foot.

“Today is a day of great at joy. Today is a day for us to say thanks to almighty God,” Prime Minister Dr. Ralph Gonsalves said at a presentation ceremony.

He said the Anglican Church had conveyed the lands freely and voluntarily to the Christian Council to be sub-divided to landless parishioners.

He, however, noted that the Anglican Church never said that the lands must be given away.

He therefore lauded the generosity of the church. “They say 50 cents. I say that is a bargain. But, in light of how long the people have been there, we (the Government) gave them at 10 cents per square foot,” Gonsalves said.

Gonsalves also responded to his critics, saying that some have said on radio that the land should be given to the people without charge.

He, however, said that those critics were in power for 17 years and never gave the land to the people, a reference to the New Democratic Party, which came to office in 1984 and was voted out of office in 2001.

Gonsalves said that in addition to the money paid for the land, the Government paid over EC$200,000 to survey it.

“They can talk but I bring to you facts,” he said.

He said that the deed that the Anglican Church conveyed to the Christian Council mandates that any money from the sale of the land must be ploughed back into the community.

He said that his Government would also invest money in the community.

Gonsalves said that his government has distributed more than 2,000 lots of land at 55 locations across the country under similar terms.

The distribution, he said, is part of his Government’s policy of turning dead capital into live capital.

Meanwhile, Maxwell Charles, Parliamentary Representative for Central Leeward, said that later this month, he will begin the process to give persons in Three Acres, Keartons, and Bottle and Glass, three other communities in Barrouallie, the opportunity to own titles to land under a similar initiative.