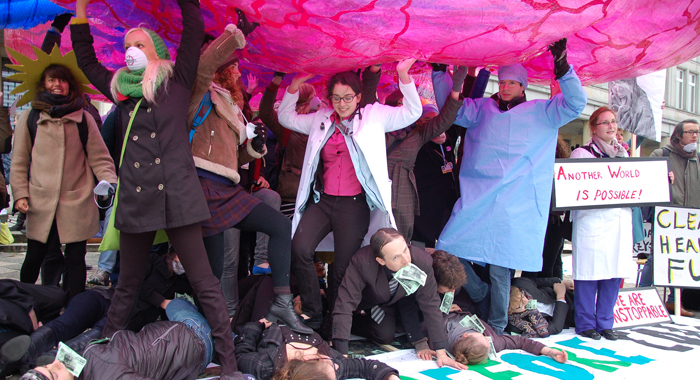 Activists stage an anti-coal demonstration outside the Coal and Climate Summit happening alongside COP19 in Warsaw on Monday, Nov. 18, 2013. (Photo: #Cough4Coal Initiative)

WARSAW, Poland — Caribbean and other developing countries are in the eyes of the storm after the first week of the climate talks here, but could use strong negotiations and the support of allies in the developed world to prevent their aspirations from being destroyed during this, the second, and final week of the negotiations.

Last week, Barbadian negotiator, Hugh Sealy, who is vice-chair of the executive board of the United Nations Framework Convention on Climate Change’s (UNFCCC) Clean Development Mechanism (CDM) and represents Nauru at the talks, told said, that the Alliance of Small-Island States (OASIS), of which the Caribbean is a member, has the support of the United States and the European Union, as they try “to bring a sense of urgency to this conference that we have to do things now; not wait until 2020”.

He was referring to the efforts to get developed countries to commit to scaling up to US$100 billion annually by 2020 the amount that rich countries would contribute to mitigate against the devastating impact of climate change on the least developed nations, as manifested by Typhoon Haiyan in The Philippines two weekends ago, and Hurricane Sandy in the Caribbean and the United States last year.

At the same time, developing countries are hoping to keep the rich nations to their previous commitments to reduce harmful greenhouse emissions, which are said to contribute to climate change.

“… we are fairly confident that we are going to get an outcome out of this conference that will bring tangible benefits to the Caribbean,” Sealey said last week, citing the support of the United States and the European Union.

But both the US and the EU, like all other developed countries, remained silent on Friday, when Japan announced it was reducing its carbon emissions goal.

Tokyo said that the revision was necessary as a result of the Fukushima nuclear meltdown, but environmental activists dismissed this as merely an excuse.

Grenada Ambassador to the United Nations, and his country’s negotiator at the talks here, Denis G. Antoine, criticized rich countries for not denouncing Japan’s decision.

Rich countries have adapted a “wait and see” attitude even as Tokyo’s decision could derail the talks. “Japan has stepped out, the other countries are very much not making any demonstration of support for the small island developing states against Japan,” Antoine said in an interview.

But while the US and EU remained silent, the Alliance of Small Island States (OASIS) said in a statement that Japan’s new target puts small islands in greater danger.

OASIS is a group of 44 low-lying island and coastal nations located in the Caribbean, Pacific, Africa, India, and the Mediterranean regions that are the most vulnerable to the impacts of climate change.

“We deeply sympathize with the tragedy Japan suffered as a result of the Fukushima disaster, and our thoughts and prayers are with the people of Japan as they continue to manage the difficult impacts of this ordeal,” OASIS said in a statement after Japan’s announcement.

OASIS, however, said that given that Japan is one of the world’s largest emitters, the bloc is “extremely concerned that the announcement represents a huge step backwards in the global effort to hold warming below the essential 1.5 to 2 degrees Celsius threshold, and puts our populations at great risk.

“This is neither the time nor the place to be backtracking on commitments made by Leaders in Copenhagen. Developed countries have committed to taking the lead and must do so as we work to peak global emissions this decade and ink a new global agreement in 2015,” OASIS further said.

The World Wildlife Fund’s (WWF) was also among groups that condemned Japan’s decision, with Tasneem Essop, WWF’s head of delegation at COP19, noting that Australia has signalled a possible weakening of its target range and started a repeal of its domestic carbon price.

Further, Canada issued a statement applauding Australia for ending its carbon tax and encouraging other countries to follow suit.

Essop said there is “no link to reality, there is no sense of urgency”, adding that WWF is calling for Parties at this conference “to express in the strongest terms their disappointment with countries who have come here to … block process, to move the process backward, to be very unwilling about reaching out and holding the trust that is required between developed and developing countries, in this very critical negotiation”.

Parties have agreed to sign in Paris an international treaty requiring all nations to begin reducing carbon emissions by 2020.

This agreement will replace the Kyoto Protocol, adopted in 1997 at the COP3 climate conference, which targeted only industrialized nations for mandatory reductions.

“Now, if Warsaw is the first point on the road to Paris and it starts like this … [and] things continue on this path, we would be very, very seriously affected in terms of reaching a final agreement in 2015,” Essop further said.

“If this COP is not going to lay a strong foundation to reaching a 2015 agreement, then we certainly are not going to see much progress in the years to come, towards Paris,” she added.

Essop’s comments seem to validate a view expressed to CMC early last week by a source close to the negotiation, who said that COP19 or even next year’s talks, will be “a progress COP”.

But Essop was also presenting what a separate source who is familiar with the sausage making but asked not be identified, said was a “moral” argument, which does not “tickle” rich countries.

OASIS, citing “the crisis now unfolding in the Philippines” presented such a “moral” argument when it condemned Japan’s backpedalling from its earlier commitment.

The group said Typhoon Haiyan, which also caused significant damage in Palau and The Federated States of Micronesia, “is just the latest in a series of climate related extreme weather catastrophes.

“Unless the international community works together to urgently reduce the greenhouse gas emissions responsible for climate change, we know more storms like Haiyan lie just around the corner. This is the reality Island Nations face today,” the group said.

“AOSIS’s members continue to hope that we heed the plea from the Philippines and the children of Kiribati that we heard on the first day and take actions that will make Warsaw the signature of our commitment that we truly care,” AOSIS said in reference to the typhoon, which a source close to the negotiations told CMC was only expected to add to the drama at COP19.

However, the source, who asked not to be identified, also told CMC, that the moral argument has a place and that COP19 is the forum to express it.

Antoine, the Grenadian diplomat, expressed a similar view, even as he said the moral argument cannot stand forever.

“But it is about accountability, it is about standing up to commitment,” Antoine said, noting that the Convention is an agreement between parties.

“This is a meeting of parties to the convention and we are expecting those of us who have made commitments to live up to the commitments. And that is what we are here trying to ask: the developed countries to hold on to their commitments, do not walk away from what they have pledged.”

And, with a week of talks left and negotiators from the Caribbean and other SIDs regions holding key position in the Conference, there is still hope that developing countries can survive the tempest.

However, if COP19 ends without a favourable outcome for OASIS, Venezuela has offered to organise and fund a pre-COP ahead of COP20 in Lima.

The talks, the Venezuelan delegation says, will be “to strengthen the position of the countries for whom the problem of climate change is more than a business”.