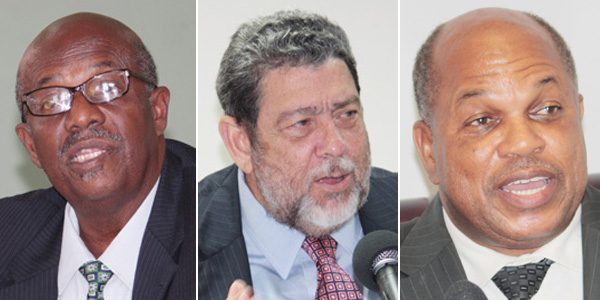 “I had a ringside seat for an amazing occurrence yesterday in Parliament,” Gonsalves said on radio.

He noted that next February will be 20 years since he is an MP, adding that he has been observing Parliament for many years before then.

“And I have never seen in our Parliament a spokesperson for any party on a bill, in this case, the opposition, where the Leader of the Opposition so utterly disowned his major spokesperson. And he did so rightly. Arnhim Eustace did not act incorrectly yesterday. He acted properly, he acted rightly in the nation’s interest,” Gonsalves said.

He was referring to Eustace having addressed Parliament during the debate — which he said he did not plan to do — then later voting “aye”, even as Lewis, a lawyer, expressed concerns about a section of the Bill.

Gonsalves said that Lewis was a member of the select committee on the Bill, but did no attend many of the meetings. He, however, added that Lewis’ absences might have been for legitimate reasons.

On Monday, Eustace said he didn’t anticipate the debate on the Bill that day and Lewis, said he would be better prepared on Tuesday, Gonsalves said.

Gonsalves, who is also a lawyer, said he shared with Lewis a brief a consultant had done on the Bill, which consolidated amendments to the anti-money laundering laws passed in 2001.

Gonsalves, who introduced the bill, also explained what it is about.

He said that in response, Lewis gave a long justification for how the nation’s laws regarding the offshore sector and money laundering had functioned up to 2001, when Gonsalves’ Unity Labour Party government first came to office.

The Prime Minister said that Lewis was attempting to show why, in his view, the external authorities didn’t have any basis on which to blacklist this country.

He said Lewis used the first half of his presentation on explaining this — “with his self justification and jaundiced history” — then went on to discuss the section of the bill that deals with civil recovery.

“And, as [is] often [the case] with Dr. Lewis, he gets himself confused with his own words and began to say things which were quite incorrect,” Gonsalves said, adding that he then go up and asked Lewis to give way and further asked about the sections to which Lewis was referring.

“Through all of this, the Leader of the Opposition was obviously discerning what I was saying, both in my original presentation and in my attempts to clarify some things when Linton was speaking.

“And he got up and he said something remarkable,” Gonsalves said.

He further said that Eustace told the House that he did not intend to speak on this Bill, and in fact was not speaking on the Bill, but that the way he votes would depend on the answers that the Prime Minister gives to some of the queries raised by Lewis.

“Linton was confusing so many things and he was making assertions of things which were plain wrong and some things he was saying were not in the Bill, were in fact in the Bill,” Gonsalves said.

“After I had given all the explanation in my wrap-up, … when the Speaker asked for the ‘ayes’, … in unison, Mr Eustace’s voice was with mine, saying yes, ‘aye’. Linton Lewis didn’t vote ‘aye’ or ‘nay’,” Gonsalves said.

“Now, this was a lead spokesperson on a Bill being disowned by his leader on the floor of the House. It was extraordinary,” Gonsalves said.

“What was of real significance was the slap down. It was done beautifully and in this case, I will say that Mr. Eustace acted correctly and in the nation’s interest. Now, what would flow from this in terms of the political consequence for Linton Lewis is another matter. That’s for them and for the people of East St. George to be making judgments in that regard,” he further said.

Lewis is the Opposition New Democratic Party’s candidate for East St. George for the next general elections, constitutionally due in December 2015.

Gonsalves said many people think Parliament is about “a lot of old talk and bramble and picong (teasing or satirical banter) ”but noted that he warns new MPs “Parliament is a very cruel place.

“… You may joke, because we are a Caribbean people; you may have your cross-talk, because we are in a competitive political environment, that’s fine, but it is not the law court, it is not a place to try to showoff, specially when you are not prepared.

“It is not a place to go unprepared, particularly now when it is live on a TV channel and two radio stations and so many journalists are following.

Gonsalves had some advice for more recently MPs.

“Please prepare yourself, approach your work seriously, but with humility, don’t believe that you are too big to learn, accept correction, gracefully concede when you have to, and move on. People are watching.

“And that yesterday was a lesson of the way in which a leader will disown you, if you don’t follow the basic tenets,” Gonsalves said.

The Bill was passed with Opposition support.