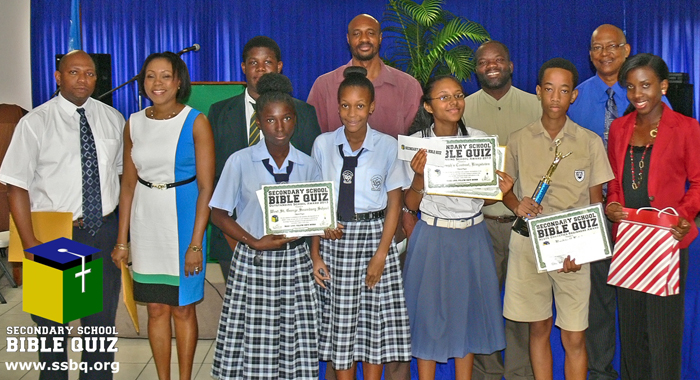 Officials of the Secondary School Bible Quiz and awardees.

The outstanding school, students and sponsors of the Secondary School Bible Quiz (SSBQ) were recognized at the SSBQ 6th annual awards ceremony on Tuesday in Kingstown.

This year’s awardees include Rockwell Lewis of the Intermediate High School, who received the Acute Cosmetics Beginner’s Award, which goes to the Form 1 student with the most correct submissions for the year. Lewis received a certificate, trophy and $500.

Alexandria Bacchus of the St. Joseph’s Convent Kingstown received the Frequent Participant Award for having the most correct submissions during the year. She was presented with a certificate and $600.

The Distinguished Graduate Award went to Ahron Richards, a former student of the St. Vincent Grammar School, who, with 11 CSEC passes, had the best results among graduates participating five times or more in the SSBQ. Richards received a certificate and an iPad mini along with a smart cover and a US$50 iTunes gift card.

The 2013 Outstanding School Award, for the school with most correct submissions for the year, went to the St. Vincent Grammar School, which received a certificate and plaque along with appliances from Courts. The Girls’ High School placed second, while the St. Joseph’s Convent and the West St. George Secondary School tied for third. They all received certificates.

Long-time sponsors Monique Mills of Acute Cosmetics and Clare Keizer of Interactive Media Ltd., also received certificates of appreciation for their consistent support of the SSBQ.

SSBQ Coordinator, Joel H. Jack, in his report, said that this year has been the best year for the SSBQ, with students from 24 secondary schools entering and a 66 per cent year-on-year increase in participation.

He attributed the improvement to last year’s launch of the website, ssbq.org. Website designer Jamali Jack of iMaculate iMagez noted that most of the quiz entries this year came through the website.

The feature speaker at the awards ceremony was Kozel Fraser, coordinator of WINFA.

Fraser encouraged young people to balance their pursuit of academic excellence with achieving spiritual excellence. She said that youth is critical to the development of any sector, and that secondary school is an environment where young people could develop holistically. Fraser told the students that the bible has already laid down the road map for their success.

She further encouraged young people to seek God while in their youth, and to believe that they can do all things through Christ once they are obedient to God’s word.

The SSBQ, now into its 7th year, is the brainchild of Joel Jack, and is designed to encourage and excite students to read the Bible.