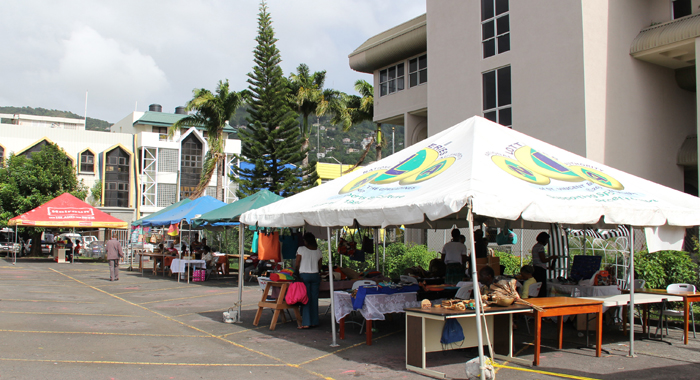 Exhibitors and visitors alike were few at the Saturday’s exhibition. (IWN photo)

Two small entrepreneurs with booths at the National Trade Exhibition on Saturday say the event was not well publicized, visitors were few and, sales even fewer.

The Ministry of Foreign Trade and Consumer Affairs organized the event, at Solidarity Car Park in Kingstown from 9 a.m. to 4 p.m.

It was intended to give local producers an opportunity to showcase their goods and services.

Cuthbert Knights, director of trade in the Ministry of Foreign Trade and Commerce, told I-Witness News that Saturday’s event was “a very small version” of what the Ministry plans as an annual event.

“It is December, it is the closing of the year, so we simply thought that we would give it a shot … to see how we can go forward next year,” he told I Witness News.

He said between 15 and 20 producers turned up at the exhibition, which also aimed to sensitize the Vincentian public about local products, give producers an opportunity to meet with distributors, marketers, exporters, and visitors, as well as make some sales.

“Long-term, what we are looking at, is the ability of these businesses to be able to lift their game, lift the standard of their product so that now they can be more export-oriented, so that in this way, we can have a lot of our products penetrating into regional and extra-regional markets and thereby being able to boost our export trade,” Knights told I-Witness News.

“I am saying all of that but we recognize too that the local businesses will also need some assistance from the Trade Ministry and from the State in general,” he further said.

He said that the intention is to start planning as early as February for next year’s event, and to engage all of the agencies and sectors of the economy.

“So, we will sit and we will plan a grand event, where we can showcase not only persons from our manufacturing sector, … but also our services,” he said.

Organisers are hoping that they can have a weeklong event, including four or five days of lectures on trade-related matters and the various opportunities under bilateral and other trade arrangements.

The number of exhibitors on Saturday was noticeable few, and asked about this, Knights said:

“I don’t have a direct answer for you, but, as I said before, we really started late and we did not intend for this to be a very large exhibition. … We really wanted to have something very small, as I said, as a prelude to what we would we be having next year.”

He gave a similar response when asked to comments about exhibitors’ statements that the event was not publicised.

Knights also noted that the Ministry of Culture was having a similar event at the Cruise Ship Terminal.

That event was the second edition this year of an arts event and when I-Witness News visited, the turnout there — where there was an admission fee, unlike the Ministry of Trade’s event — was similar.

“I cannot explain to you, again, why some of the persons did not show up today. But, we did have confirmation from some of them that they would be here. But for some reason or the other they were not here.

“But I think it is a matter for us to engage them more, get them on board, and start the planning process early. And we are very confident that next year will be very much different,” Knights told I-Witness News.

Meanwhile, Evadnea Phillips, who displayed and offered for sale fashion jewellery, clutch purses and hats, said the exhibition “was not all that good because hardly any body came in.

“I understand they only advertised it yesterday, which I think … is poor. Because, if we are going to come here, I mean, we are small business people, we have our customers…, people who would be looking for us in our various business place or spot, where we do our business.

“We are going to leave that and come out here thinking … we are going to attract new buyers and so on, only to find that it was just sitting here, nothing to do, hardly anybody coming in, just because it probably wasn’t advertised enough,” Phillips told I-Witness News.

She said that she finds these exhibitions are either not advertised enough or their locations are not the best.

“ [Compared with] previous exhibitions, … you wish you were doing something else. … you are no attracting the crowd.”

Phillips said she believes that these exhibitions should be held in the four wings of the Central Market in Kingstown.

“Those four wings are being used to store goods. … I think that is the best way you can use the market right now.”

Phillips said that while she was packing up — around 2 p.m. — she made two sales, totalling “not even half of a hundred dollars.”

“It didn’t [go] very well, because the turn out was poor and I don’t think it was advertised properly,” she told I-Witness News.

She said she could count on her fingers the number of persons who came to see her booth.

She, however, told I-witness News that the response to her new product line was “great”.

“But I think the response would have been greater if the public had known about the exhibition,” she said.