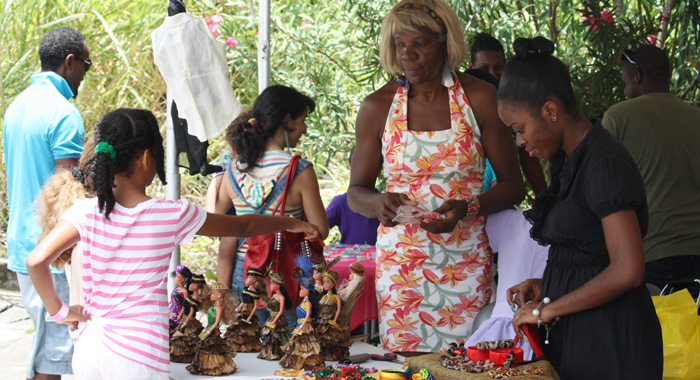 Artisans and visitors to the cultural festival interact on Saturday. (IWN photo)

Artisans had an opportunity to display their arts and craft at an event dubbed “Cultural Festival 2013”, last weekend.

The two-day event, which was held at the Cruise Ship Terminal, showcased various local crafts, international cuisine, as well as provided local entertainment.

It was held in partnership with the Ministry of Tourism, Sports and Culture and the SVG Port Authority

Jan Fernandez, organiser of Cultural Festival 2013, told I-Witness News that the event, which included a kids’ corner, aimed to build awareness of the private sector in the field of arts and craft.

The intention, she said, is to look for export markets for artisans as well as a fun event for the public.

She said the local market for arts and craft should be developed before artisans begin looking for market overseas.

“Our craft people are very enthusiastic about building our business. I want to help them,” the public relations expert and entrepreneur told I-Witness News.

She said that at the same time, she wants to help the private sector to build the nation’s infrastructure and education.

“The response has just been great; I am loving it. This is just the first, pilot run. They are asking to do another one for Independence, and we have one scheduled for Christmas — a three-day event, Christmas Vincy Marketplace. And we will feature craft and our agro produce,” she further said.

“We have a great blend of culture,” Fernandez said, adding that they need to be highlighted.

One reply on “Artisans showcase craft, food at cultural festival”