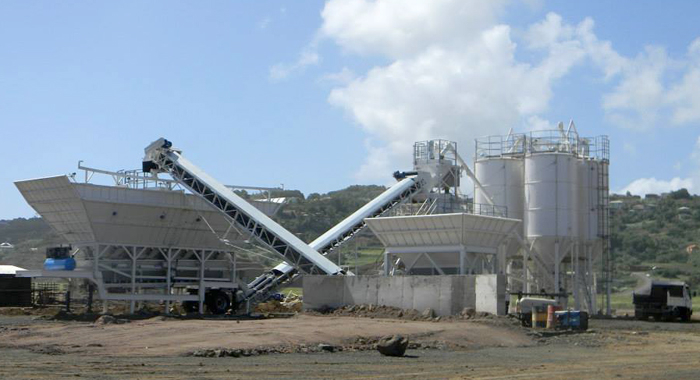 The concrete batching plant at the airport. (Photo: Friends of the Argyle International Airport/Facebook)

Things are “going guns” at the EC$652 million argyle international airport, as the Government pushes to meet the most recently announced completion date: mid-2014.

“2014 is going to be a year of heavy, heavy work to see the completion of the Argyle international airport,” Minister of Works, Sen. Julian Francis said Tuesday night on his weekly programme on the ruling Unity Labour Party’s radio station

“As you know, in November, we went to Parliament and got the rest of the money, the US$80 million that was required, to complete the airport,” he said, noting that the amount is including the 2014 Budget.

Francis said he was at a meeting at the Airport site for most of Tuesday.

“The terminal building is just about finished and it is going to be handed over for the end of this month,” he said.

He added that the handing over of the building — constructed by a Taiwanese firm — to the Government will not be “a public session”.

He said that only the actual construction of the building is completed.

“… the computers and data systems and check-in counters, the covered ramps from the aircraft to the building, all these things have to be fitted, and, because [earth]works are still going on and there is still a lot of dust around, the building is not yet received its final coat of paint.”

Francis further said that the parking lot is still to be built.

“And they are going guns, but the fitting in of the computer, the check-in counters, the [flight status] displays, all the fancy equipment that come with an international airport, now that the building itself is constructed and ready, the construction itself, this other aspect will commence,” Francis said, adding that there will not be public access to the building during the outfitting.

He said the asphalt plant “is in its final stage of being set up”, and bitumen suppliers have been contracted.

The person responsible for the relocation of the petroglyphs should arrive this month.

“Those works are on-going,” he said, adding that the laying of stone on and compacting of the runway, the levelling of the course, and the large concrete drains to take the water under the runway, …are being fine-tuned and completed.

“So, a lot of work is going on out there. … All that is taking place at the airport.”

Francis said that five cement trucks have been delivered and concrete works are going to be started “in the not too distant future”.

“We are going guns. Contracts are being awarded for the other buildings, he said, mentioning the fire station.

He added that tenders are being assessed and contracts will be awarded soon for the construction of the control tower and the fire station.

“And you have other areas of general cargo, hangars; and these are works that can be completed within eight to 10 months — maximum eight months.

“So putting those in place now is all part of the plan, because you have to get the road network built around it and then on the main highway, the roundabout there is still yet to be done, which would direct the traffic in an out of airport and to and from the country side…

“So things are going great guns out there and I believe that this 2014 coming is going to yield some great results for the Argyle international airport,” Francis said.

Construction of the airport is entrusted to the state-owned International Airport Development Company.