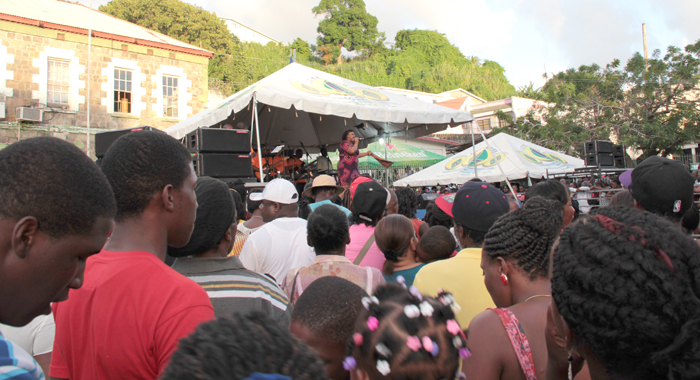 Persons view a performance at the Prisons Concert in Kingstown on Sunday, Dec. 22, 2013. (IWN photo)

A large crowd attended the annual “Talent Behind the Walls” concert in Kingstown on Sunday, where prisoners showcase their musical talents.

The event is part of Christmas celebrations here.

Many of the prisoners used the opportunity to send greetings to their relatives and friends who were among the crowd.

They had one recurring message to the audience: stay away from prison.

Ex-prisoner and former teacher Grantley Bramble was one of the emcees at the event.

Bramble, who was in 1997 sentenced to 20 years in prison for rape, was released in April 2012 after a meeting of the Prerogative of Mercy Committee.

Cordelia Stephens and Anthony Robinson — then the longest-serving prisoners — who were convicted of murder in 1989, were also released.