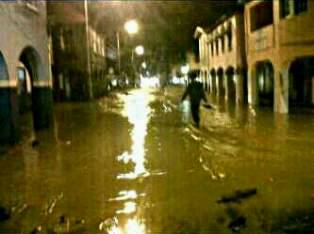 The extreme weather event left several areas without electricity during the night, and without pipe borne water Christmas morning.

The Central Water and Sewerage Authority (CWSA) has announced that a large swath of the country could be without water for “an extended period” today, Christmas Day.

Michelle Forbes, deputy director of the National Emergency Management Organization (NEMO), said in a report at 3 a.m. today, that an 18-year-old female and her 2-year-old brother were reported missing in the Buccament area, on St. Vincent’s south-eastern coast, where an emergency shelter, housing five families — 27 persons, had been activated.

The National Emergency Operations Centre (NEOC) is partially activated and a number of key agencies and volunteers are involved in the operations, Forbes said in an update, which was also posted on NEMO’s Facebook page.

Several persons were trapped in their home from floodwaters.

The E. T. Joshua Airport was flooded and is scheduled to open at noon on Christmas Day.

The Paediatric Ward at the Milton Cato Memorial Hospital was also flooded and heavy flooding was also reported in other parts of the nation’s capital, Kingstown.

Forbes said that the Building Roads and General Services Authority (BRAGSA) and the Ministry of Transport and Works have reported that several bridges and roads are flooded and will conduct assessments as soon as possible.

The heavy rains that have been affecting the country over the past few days intensified Christmas Eve night, triggering floods across the country.

Meanwhile, the CWSA has reported damage to its Dalaway and Layou water supply systems.

CWSA said the damage resulted from heavy rainfall in the interior and the resulting flooding of the Vermont/Buccament riverbanks.

“Residents from Layou, South Leeward, Kingstown and its environs right through to Villa will be without pipe borne water for an extended period from today, Christmas Day,” the CWSA said in a statement, also published on its Facebook page.

The CWSA said its staff will be carrying out a complete damage assessment today, “when hopefully, the rain and the rivers abate”.

Following are some reports of damage posted on the I-Witness News Facebook page overnight and the approximate time (Eastern Caribbean Time) of the post: