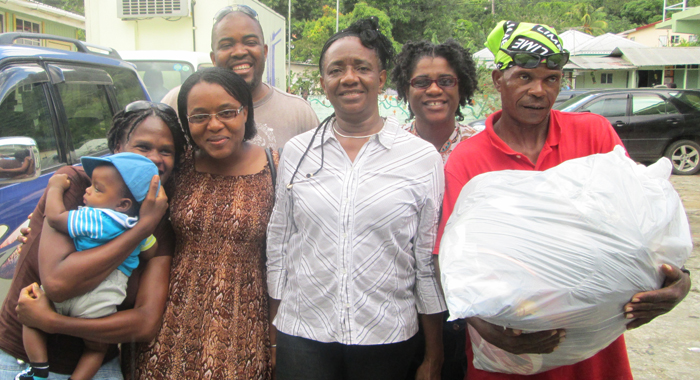 Members of the Thusia SDA church with one of the shelter managers, Ms Mcdowall, center, and a survivor assisting her in Buccament Bay. (DRP photo)

Leader of the fledgling Democratic Republican Party, Anesia Baptiste, has warned against using relief supplies for the 24/12/13 disaster as an “election gimmick”.

The DRP said in a release this week that two days after the disaster, Baptiste visited emergency shelters on the Leeward side of St. Vincent and distributed aid and prayed with the displaced persons.

Nine persons died, four are missing and there was extensive damage to public infrastructure and housing as result of a low level trough system on Christmas Eve.

The release said that even as Baptiste continues to mobilize help for affected families, she gave a stern warning “against the politicizing of the relief efforts on the ground” and said her party will investigate any serious claims of politicising of the disaster relief.

“Let us remember that the assistance from foreign countries is for the people of St. Vincent and the Grenadines and not for the Government. Therefore, relief supplies must not be used, in any way, as an election gimmick,” Baptiste said in a DRP press release.

Baptiste further said it is a fact that “discrimination on the grounds of political affiliation took place during past disasters, where non-supporters of the governing party had difficulty accessing help despite their qualification for assistance.

“This must not happen again. I strongly condemned this action then and will do so again this time, if necessary,” she further said.

“The Government must remember that it is the government, not only of its supporters, but of all the people of St. Vincent and the Grenadines and that everybody who needs help must get it, regardless of political affiliation. Its workers in the disaster relief effort must be made to understand this also, so that they may work professionally to assist those in need and not party friends and supporters who do not have need,” said Baptiste, a former senator for the opposition New Democratic Party.

“In order to prevent this corruption, it is crucial that we ensure the management of relief efforts is not put into the hands of political party hacks.” Baptiste further stated.

“The DRP will investigate any serious claims of such politicizing of this process and expose them accordingly in the interest of fairness and justice for all our hurting and needy people at this time.

“Furthermore, we call upon Vincentians to be reflective at this time and to look to the heavenly Holy Father YHWH God for comfort and guidance going forward. May our people be repentant or turn away from our sins of lawlessness, crime and violence, and ask God to change our characters that we may live upright lives before him and live loving with our fellowmen, respecting their rights and freedoms.” Baptiste said.

The DRP founder further stated that, “Disasters of this nature taking place here and around the globe have been foretold in Holy Scriptures as signs of the second Coming of Jesus Christ and we are admonished by him in Luke 21:28 that when we begin to see these things happening, we must “look up, and lift up our heads; for your redemption draweth nigh”.