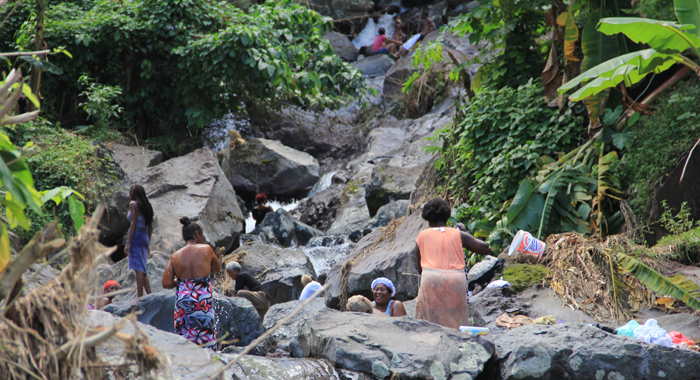 Residents of North Windward bathe in a river on Tuesday, Dec. 31, 2013. Water was yet to be reconnected there, one week after the disaster. (IWN photo)

An opposition lawmaker says that the “biggest failing” of the Government in its response to the 24/12/13 disaster is not distributing water purification tablets sooner.

“Believe you me, they can save lives,” Daniel Cummings, MP for West Kingstown and a former manager of the Central Water and Sewerage authority (CWSA), who praised the water company for its response after teh storm, told I-Witness News on Monday.

Massive flooding and extensive landslides from a trough system on Christmas Eve, which claimed nine lives, also left half of the nation’s consumers without potable water, forcing them to revert to rivers, and springs.

On Boxing Day, Dec. 26, Permanent Secretary in the Ministry of Health, Luis de Shong, issued a press release said that there was loss of municipal potable water supply to all citizens and that alternative water sources for life and livelihood are, therefore, a viable option.

The Ministry appealed to all citizens to ensure that water used for human consumption is not only clean, but also safe.

The release said that in the absence of water from the CWSA, water from rivers is not to be used for human consumption, including bathing.

Among other things, the Ministry said that harvested rainwater from clean roofing materials should be strained and sanitized by either boiling or the use of sanitizing solutions or tablets

“Packaged bottled water is strongly advised, especially for drinking purposes,” the Ministry said in the release.

Three days later, on Sunday, Dec. 29, the Ministry announced that it was deploying staff to advise on healthy lifestyle choices and distribute water purification tablets.

“It’s for me the biggest failing of the country, this government through the Ministry of Health,” Cummings said of the length of time that elapsed before tablets were distributed.

He said that chlorine tablets are a valuable tool in disaster situation like the one that SVG is experiencing.

He noted that in North Leeward, access was cut off and residents were isolated without potable water.

He noted that there are a lot of streams in the areas, but said, “… given the death and destruction, dead animals in the stream and so on, that water is not safe even for bathing.”

One week after the disaster, the decomposing carcass of a cattle was still lodged in the river in Pembroke, even as persons in Buccament Bay, a community lower down the river, were using the water for washing and bathing.

The Ministry of Health, in its bulleting on Sunday, said the absence of the primary water supply from the CWSA and the interruption of regular waste collection services may result in persons engaged in unsanitary practices to sustain lives and livelihood.

“One household’s source of water may be another’s waste disposal site. In this regard, the general public is requested to desist from using unsafe water for any form of human consumption and to practice safe and hygienic onsite storage of solid waste,” de Shong said.

Cummings noted to I-Witness News that young children, the elderly and sick are more vulnerable and if they consume contaminated water the nation “could have a catastrophe on our hands”.

He said that the safest way is to distribute water purification tablets to the people themselves, and a disaster plan should have trained persons who can distribute these tables.

He said that it was impractical for people to boil waster when their gas bottle were washed away.

“Talk is one thing, but they fell woefully short,” Cummings said of the Ministry of Health, adding that on Christmas Day it was “patently clear” that water would be out for some time.

“Disaster preparedness means having people in every community with these tablets ready,” the Opposition legislator said.

He said these persons would not then have to wait on an announcement from the Ministry of Health but would go into action immediately.

Cummings emphasized that chlorine tablets can save lives.

“You see the number of dead animals floating down the rivers and you see people bathing. When you bathe in the river, the water must go in your system, no matter how hard you try,” he told I-Witness News.