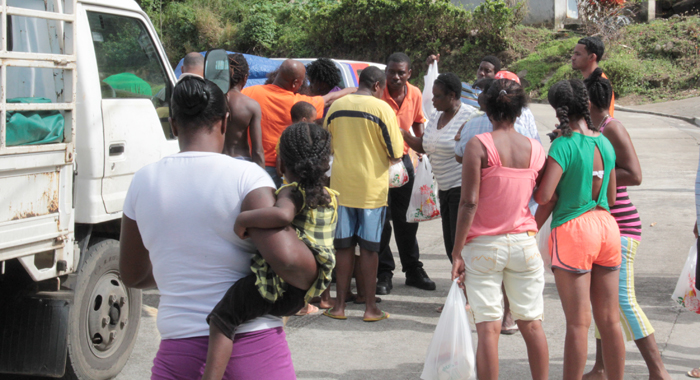 “It is a difficult time, and people are suffering. So we have two St. Vincent and the Grenadines: one which is normal, and the other one which is anguished and pained,” he said Monday.

“Across this country, people have lost their beds, their furnishings, their cooking utensils, their stoves, their fridges; laptops given by the state are destroyed; books, clothing, shoes, everything is lost; every single things,” he said.

Gonsalves said that the 24/12/13 disaster, which has also damaged public infrastructure extensively, is the worst in living memory.

He said that persons entering the country at the seaport in Kingstown or Campden Park or the E.T. Joshua Airport will not know the extent of the damage.

He said the first task is to take care of people’s immediate needs.

He said that by yesterday, Wednesday, 85 per cent of the country would have water.

“But large number of persons who got up this morning had no water to drink or to bathe in,” he said.

Gonsalves said that persons without water have as a “serious challenge” normal bodily function, in terms of waste disposal, which were taken for granted.

“So I want us all to remember that as we go about our work,” Gonsalves said.

He said that over 300 persons are homeless, with about 240 living in emergency shelters.

“But the numbers of the persons who are living in accommodation, which accommodation is wholly unsatisfactory are several times that number,” he said, adding that some persons do not want to go to emergency shelters.

Gonsalves said that there are persons who have not lost their home either partially or wholly, but their homes have been ravaged by water.

“In areas of the countryside, the mud has been cleaned and some people are sleeping on cardboard,” Gonsalves said.

He, however, said that the “remarkable thing” is that Vincentians have responded with “such resilience and stoicism”.

“The sharing which is taking place is extensive and commendable. I see in this disaster the seeds of a new St. Vincent and the Grenadines — different and better, and we must keep our focus.