CWSA to restore water supply to Barrouallie area by Wednesday 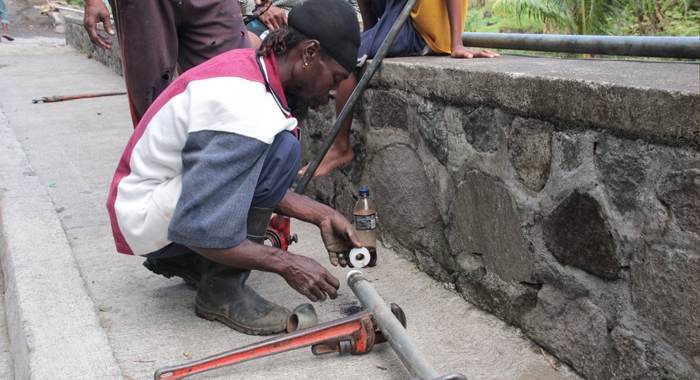 An employee of CWSA works to repair the water network in North Windward on Tuesday, Dec. 31, 2013. (IWN photo)

The Central Water & Sewerage Authority (CWSA) says that the last of the eight water supply systems damaged during the Christmas disaster will be restored by tomorrow, Wednesday.

“Restorative work continues on the Hermitage System, which has been partially restored enough to supply residents of North Leeward with a supply,” CWSA said on Tuesday.

“Construction work continues on the segment of pipeline supplying Belle Isle, Keartons, Barrouallie and Peter’s Hope. This is expected to be fully restored by Wednesday, January 8th 2014,” the CWSA further said.

(Read also: More rain fell in 5 hours Christmas Eve night than often does in a month)

The company said that customers in the affected areas may still experience periodic outages due to the need to continue repairs on smaller pipelines in the distribution network.

During the passage of the trough system Christmas Eve night, eight of the CWSA’s water supply systems suffered damage, leading to loss of supply to 75 per cent of consumers.

Supply to all customers, except those serviced by the Hermitage system has been restored.

Nine persons died during the passage of the trough system and a further three are missing and presumed dead. Some 495 houses were damaged, in addition to extensive damage to public infrastructure and EC$13 million in loss and damage in the agricultural sector.