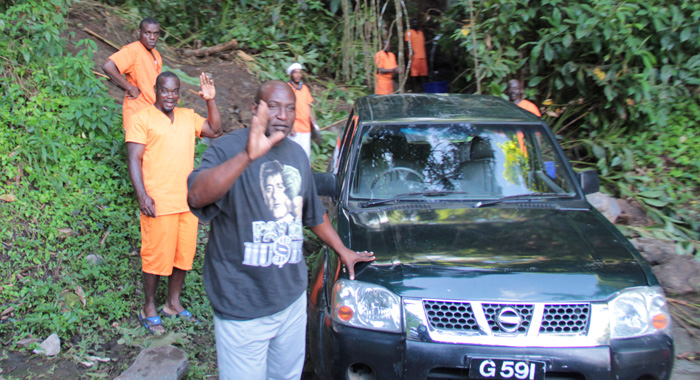 Prisoners collect water from a flow at the roadside near the Belle Isle Correctional Facility on Dec. 27, 2013. Belle Isle and some parts of Central Leeward were without water up to yesterday, Thursday, Jan. 2. 2014. (IWN photo)

Some parts of St. Vincent received in five hours Christmas Eve night as much rain as falls during an entire month, data collected by the Central Water and Sewerage Authority (CWSA) show.

The rains, from a low-level trough system, triggered flooding and landslides that have claimed nine lives, left four persons missing, extensive damage to housing and public infrastructure, and, at one point, 75 per cent of consumers without pipe borne water.

Ninety per cent of consumers were expected to be reconnected by yesterday, Thursday, with residents of Mt Wynne, Barrouallie, Peter’s Hope, Belle Aisle, in Central Leeward, and some areas of Owia, in North Windward, without a municipal supply of water.

Water has not been restored to the Central Leeward communities, because 500 feet of pipeline is down on the Hermitage system, which supplies Belle Isle and Barrouallie.

These pipelines have to be replaced and rerouted and is being worked on.

“It varied in some of the other stations, 10 inches, eight inches,” Saunders said.

The lowest rainfall, five and a half inches, was recorded on Leeward (western) side of St. Vincent, Saunders said.

“In the interior of the island, we experience significant rainfall from that trough system and I think at the end of the rainy season, you would expect the ground to be saturated.

“So, whatever fell on the ground, it could not infiltrate, it had to run off and I think that is the problem we suffered from – St. Lucia as well,” Saunders said.

The CWSA has 11 water systems across St. Vincent and had

“unprecedented” disruptions because of the impact of the extreme weather.

“Never before in the history of the CWSA has eight water supply systems been down at the same time,” Saunders said, adding that the state-owned utility had to mobilize and stretch teams thinly.

Employees who have been with the company for 40 years say they have never experienced such extensive disruption, said Saunders, who has been a water engineer at CWSA since 1988.

Saunders, however, said that he thinks the company has done “a good job,” adding that while employees at CWSA “respond almost automatically”, it took a day or two to mobilise some staff, since most of them were not at work, on account of the Christmas holidays.

He, however, said that many of the company’s employees returned to work on Christmas day and have worked throughout the last week to restore the nation’s water supply.

“And they did their job and went beyond the call of duty,” Saunders said.

Saunders also lauded the contribution of the private sector, which helped to truck water to the affected areas.

Saunders, however, said that he is “guardedly” reporting that water has been restored to 90 per cent of the population.

“… we have to think about if there are leaks that were not visible before, because once you put water in the line, you are able to see, able to detect any leaks.

“So, we are hoping that no further damage has been done beyond what we had seen originally. But the system is up and running now,” he further told I-Witness News.

Asked if he thinks that the CWSA had done all it could to anticipate and mitigate against the disruptions, Saunders said:

“We never expected to have eight systems down at once. We probably would have in our minds, maybe four systems, because in the past, that is what we’ve had.

“A widespread outage as we had, we never anticipated it, but we have always been in a preparatory mode,” he said.

Saunders said that the CWSA’s Emergency Response Committee, which he chairs, meets every month and revaluates its readiness.

“We ensure that equipment that are being used, that would be required for an emergency is up and running — small equipment, heavy equipment, and by and large, that saved us; that helped us in our response,” Saunders told I-Witness News.

“We were spread thin in terms of one pipeline size, and thankfully, we were able to get assistance from Grenada,” he further added, saying that an additional four lengths of pipe and some gaskets were required and they were sourced from the water company in Grenada within a day.

“But outside of that, we were well fortified and I think that is really commendable,” he said, adding that the CWSA experiences outages, land slippage, landslide, and leaks almost every day.

“We have to be in that mode. That’s part of what we do. We never expected that scale but we have by and large responded well.

“From an Emergency Response Committee, and as head of that committee at CWSA, I think we did very well,” he said, adding, “We have certainly a problem with overall co-ordination. We could have done better.”

Saunders said that because of the widespread nature of the damage, it is always a challenge communicating and coordinating with the different teams.

At one point, eight teams were working in one area.

“So I probably would think from the central committee side, we would improve on the coordination and logistics and so on but that is to be expected.

“When you are in a mode where you are trying to respond right away, everybody wants to get their job done. But, sometimes it’s always better to have a more coordinated approach, and next time around, we will look at that aspect of our approach — to coordinate better,” Saunders said.

He said that CWSA’s customer service and technical staff responded on Christmas day while the other staff were mobilised within a day.