MPs entering Budget Debate ‘in somewhat of a blind way’ 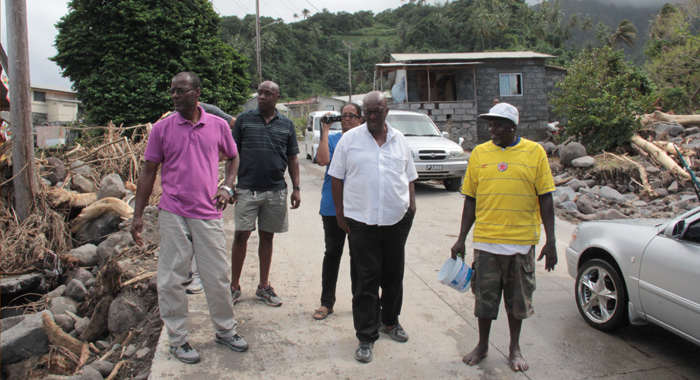 Opposition Leader Arnhim Eustace, centre, and other members of the NDP visit North Windward after the Christmas disaster.(IWN file photo)

Opposition Leader Arnhim Eustace says that lawmakers will today begin debating the 2014 Budget “in somewhat of a blind way” because they do not know the impact of the Christmas floods on the Estimates they approved in December.

On Dec. 9, Parliament approved Estimates of Revenue and Expenditure for 2014 totalling EC$911.57 million.

The floods and landslides over the Christmas holidays left EC$353 million in damage, according to preliminary estimates, Prime Minister Ralph Gonsalves has said.

Eustace, an economist, speaking on radio on Monday, said he believes today’s budget presentation will be unusual.

“Because the storm did much damage, it means that a lot of the figures which were decided and approved on the ninth of December will change,” Eustace said.

He, however, noted that these changes would be reflected in supplementary estimates, which will come to Parliament later this year.

“So, there a lot of areas of the estimates which we don’t know this evening,” Eustace said.

“When he (the Prime Minister) makes what I expect to be a long presentation in Parliament today, we will have to wait until the end of the week for a Budget to be approved, we will be doing that in somewhat of a blind way, because we don’t know all the impact it (the weather system) has on the Estimates,” Eustace said.

He, however, pointed out that if a Budget is not approved by the end of this month, the Government would not have the right to spend money as of Feb. 1.

“The other day in the United States, when you had the shutdown, that is what we will be having if we don’t have a budget approved before the end of the month,” Eustace said.

He, however, said that even if a budget is approved, lawmakers still would not know the impact on the Budget and the economy of having to present a Budget without having any new estimates.

Eustace said that while he expects that the Prime Minister will give “a long description” of what the Government proposes to do about the storm, lawmakers will have no document before them which says how the Estimates are changed.

“So, it will be very difficult to debate that issue without the figures to show how the Estimates are changed,” Eustace said.

Eustace also said that he is awaiting the Budget Address to see what figure the Prime Minister will quote or the loss and damage resulting from the storm.

“I don’t know how that was calculated. I really don’t know,” Eustace said.

“I Don’t believe the cost of rehabilitation or the cost of building back what we lost and so on will cost 353 million; but there may be some methodology or some method they are using that I don’t know about, although sometimes people calculate the lost that you had and then add on to it the money you have to repair it,” Eustace said.

He further said that his evening exercise will not say if and how the economy is expected to grow this year, since supplementary estimates will have to speak to changes to allocations to the various sectors of the economy.

A trough system on Christmas Eve triggered floods and landslides in various parts of St. Vincent, resulting in damage to houses, roads, bridges, and other infrastructure, and agriculture.