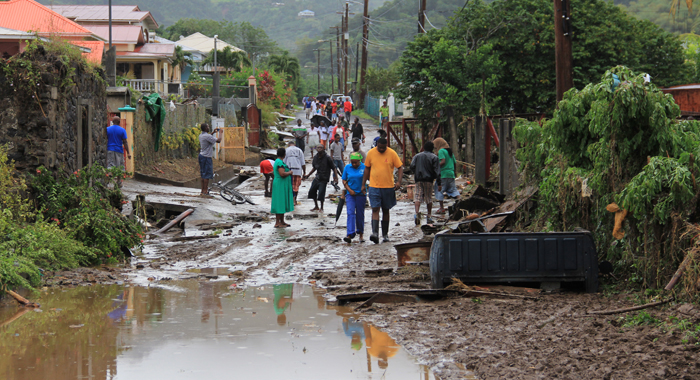 The damage and loss caused by the Christmas floods is expected to form the backdrop when Prime Minister Ralph Gonsalves presents the 2014 Budget on Monday, Jan. 20.

Preliminary estimates show damage and loss as a result of the weather system amounting to EC$353 million.

The floods and landslides have also left nine persons dead and three missing.

He said the Food and Agricultural Organisation (FAO) has placed the damage to the agricultural sector at EC$31 million, with EC$24 million in damage and loss in the forest.

Parliament in December approved Estimates of Revenue and Expenditure for 2014 totalling EC$911.57 million.

The figure represents an increase of EC$112 million over the approved Budget for 2013, and Opposition Leader Arnhim Eustace, accused the Government of “bunching” the Budget ahead of general elections, constitutionally due by the end of 2015.

Gonsalves, however, said the 14.1 per cent increase over the approved Budget for 2013, was due to a 45.5 per cent hike in capital expenditure, largely because of spending on the EC$652 million Argyle international airport, scheduled to be completed this year.

Work on the airport and some other capital projects are expected to continue as scheduled, even as funds will be diverted from other projects, Gonsalves has said.

“In any case, you need the airport to help you — very much so — to strengthen your own resilience to vulnerability. Even in the case of a natural disaster, to bring in stuff, supplies by air, there is a limit what you can do at E.T. Joshua, so that itself is an issue to strengthen the country’s capacity to address the vulnerability issue, both in respect of nature and of the economy,” he told a press conference this month.

He said supplementary appropriation bills will be needed to bring into account any contribution the country gets for disaster relief, be they grants or soft loans.

“Clearly, there have to be alterations in the Estimates which we have before us,” he said.

There were no new initiatives or programmes in the recurrent estimates approved in December, but Gonsalves announced that 102 new staff positions would be created.

He said the new staff positions are “absolutely necessary and desirable” and include police, Coast Guard and fire department personnel.

It was not immediately clear if these appointments will be affected by the storm.