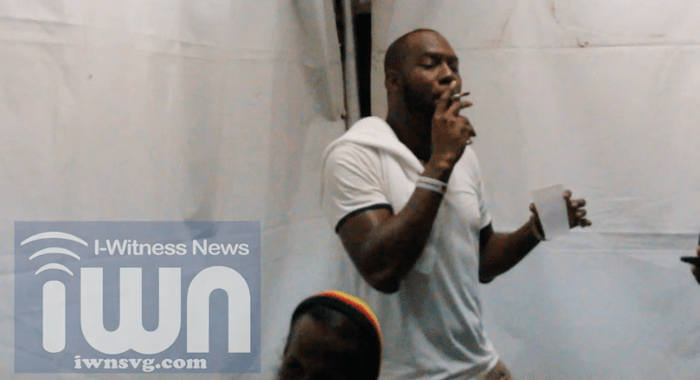 Trinidadian soca artiste Benjai enjoyed more than just Vincentian hospitality when he visited to perform at the “Rise Up SVG” charity concert on Saturday.

The artiste, whose real name is Rodney Le Blanc, wrapped and smoke a “spliff” (marijuana cigarette) while waiting to perform at the show, which aimed to raise the estimated EC$400,000 needed to repair the Maternity Ward at the Milton Cato Memorial Hospital, which was damaged during the passage of a trough system on Christmas Eve.

Lester “Mack” Iroha, who has produced at least one of Benjai’s songs, also took several drags on the spliff.

The smoking took place under a tent where members of the Resistance Heartbeat Drummer were sheltering rain and had continued drumming after their performance early in the show.

The drummers, media workers, and other members of the public were under the tent when Benjai and his entourage walked in.

The artiste was initially smoking a cigarette but later wrapped up the spliff, and inserted one end of it into the partly burnt cigarette then continued smoking.

He took intermittent puff while singing extemporaneously to the drumming.

Iroha and another member of Benjai’s entourage took what appeared to be audio recordings of the singing.

Benjai later performed at the concert, taking off his shirt at the beginning of the act, revealing a six-pack, much to the excitement of women in the audience.

(Watch video highlights of the show)

He was among several regional artistes, including Allison Hinds of Barbados, and Grenadian Tallpree, to perform at the charity event.

The cultivation, possession, and sale of marijuana is illegal in St. Vincent and the Grenadines, but marijuana is widely used and readily available for purchase.

Prime Minister Ralph Gonsalves has asked the regional bloc, CARICOM, to consider the decriminalisation of marijuana for medical purposes.