Frank Da Silva says he will campaign against NDP 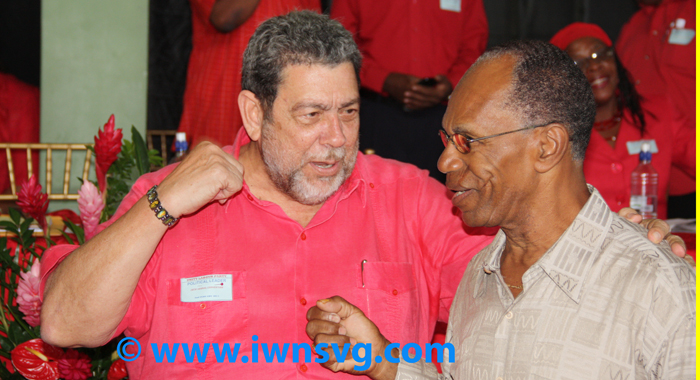 Frank Da Silva, right, seen here with Prime Minister Dr. Ralph Gonsalves, at the ULPs convention on Feb. 2, 2014, seems to have been given tacit approval to critcise Thomas on the ULP’s radio programme. (Photo: Zavique Morris/IWN)

Political activist Frank Da Silva, who created a stir when he attended the ruling Unity Labour Party’s convention on Sunday, says he is no longer a member of the opposition New Democratic Party (NDP) and will campaign against it in the next general elections.

Da Silva said he attended the ULP convention because he “wanted some tongues to wag”, and to show the difference between the two parties.

“I have no status with the NDP. I have a problem calling the people there NDP. … They should be called something else,” Da Silva told I-Witness News on Monday.

He said that the last time he paid any subscription to the NDP was in in 2006.

Da Silva has been publicly critical of the NDP and its president, Opposition Leader Arnhim Eustace, who was at the helm when the party lost general elections in 2001, 2005, and 2010.

Asked if he is a supporter of the ULP, Da Silva said:

“… I could agree with nine out of 10 things that you do, but if I disagree with one, it could amount to me being on the other side,” Da Silva said.

To illustrate, he said that he believes the nation should have changed its Constitution in 2009.

“… but I would never support a constitution that change the Privy Council. So, even though I agree with all the other things, that one is so important to me, I won’t support it,” he said.

“Eustace is such an ungrateful fellow, I can’t support those guys, based on that alone.”

Da Silva said it was the first time that he attended a ULP convention.

“I know I wanted some tongues to wag. I wanted people to see how people behave.

“Kingsley De Freitas appeared at the NDP convention, and he always on radio saying he support them, but what did they do? He was booed and asked what he was doing there. According to him, he left.

“I went to the ULP convention, nobody in this country has been after the ULP and Ralph more than I. Yet, they didn’t boo me. You think that would have happened at the NDP? I don’t think anybody in their right mind would say what happen yesterday when I appeared at the ULP would happen at the NDP,” Da Silva said.

There was loud cheering when Da Silva arrived at the convention, which was already underway.

No Mitchell faction in NDP

Like Da Silva, NDP founder, former prime minister, James Mitchell, has been critical of the current leadership of the NDP.

Ask if there are Eustace and Mitchell factions in the NDP, Da Silva said, “Those fellow there, if any of them were there supporting Sir James, you think Eustace could have written that out-of-place letter and somebody ain’t say I resigning?”

He was speaking in reference to an open letter that Eustace wrote to Mitchell after Mitchell’s latest round of criticism in the wake of the NDP convention last year.

“What faction of them there [is] supporting Rishatha Nicholls?” Da Silva said in reference to the on-going saga over severance pay, between Eustace and Nicholls, who he fired as his secretary last year.

“They supporting Eustace; that’s what they are doing. I don’t know that they are NDP. They are there supporting a man. You are saying that there are two factions, there is none. Anybody who is supporting Mitchell is not welcomed in that party.

“Ask Cooke if you think I am joking,” Da Silva said in relation to former host of the NDP’s “New Times” programme, Ernesto Cooke, who resigned the position last week.

“In that thing there, right now, there is no Sir James faction, because it is his party. And what is there is not his,” Da Silva said.

At the convention on Sunday, Da Silva presented Gonsalves, who is also Minister of Finance, with two books: “Basic economics” and “Economics in One Lesson”.

“And if he reads any of them and follow them, we don’t need no IMF or anybody to turn the economy around in St. Vincent and the Grenadines,” Da Silva said.

Asked to comment on the fact that the NDP moved from three to seven seats in the 15-member parliament after the 2010 general elections, Da Silva said.

Regarding the ULP’s chances in the next general elections, constitutionally due in December 2015, Da Silva said:

“If you listen to the voices that are no longer speaking for the NDP, then you might come to a conclusion. Looking who they have calling up the NDP programme everyday — a bunch of ragtag nuts, and you are not hearing from people like Junior Bacchus or Matthew Thomas. Where are they?” he said.

Bacchus and Thomas are social and political activists and former radio talk show hosts, who have been critical of both the ULP and the NDP in the past.

Asked if he would support the NDP again if the leadership were to change, Da Silva said:

“To replace with whom? If it is going to be replaced with [NDP Vice-President and Central Kingstown MP, St. Clair] Leacock, no way! If it going to be replaced with [West Kingstown MP, Daniel] Cummings, now way! As a matter of fact, right now, they need a clean slate or me to support them … because all of them are a bunch on ingrates. They are all to a man a bunch of ingrates. That’s my assessment.”

But while Da Silva said, “you bet you” he will campaign for the ULP in the next general elections, he said he will not campaign against two of the NDP’s candidates.

“Don’t ask me, I am not telling. The candidates are on the mainland and not in the Grenadines. I’ll campaign vigorously against Daniel Cummings.”

He said that he was not being critical of the NDP because he could not get his way.

“What way is it that I want? When they are going to say that, they must say exactly what the way is. So I can’t respond to something like that. Tell me exactly what is the way I want. Just like Sir James, he wants to see the NDP back in power and it has been demonstrated time and again that Arnhim Eustace is incapable of doing that.

“Added to that, he is an ingrate; he doesn’t want anybody to criticise him, and I have been there. He has the dictatorial tendencies. Anybody ever heard Ralph Gonsalves say anything nasty about Frank Da Silva? Anybody? So how could Eustace sit there and hear people calling me a scar face? You ever heard him say anything? Yet I go campaign for him after that. So let them talk about personal,” Da Silva said.