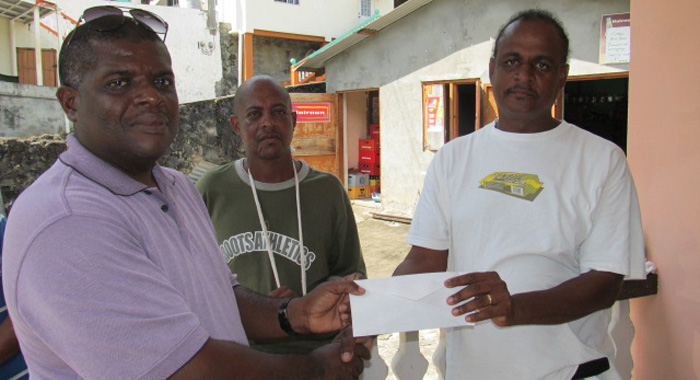 The opposition New Democratic Party today, Wednesday, made a financial contribution to the Nanton family of Rose Bank, who lost five members in the Christmas Eve floods.

President of the NDP, Opposition Leader Arnhim Eustace, and MP for North Leeward, Patel Matthews presented the donation to Basil Nanton and other members of the Nanton family, the NDP said in a press release.

The party said that the location of the tragedy, where a landslide killed five persons in a single house, formed the backdrop, as a teary eyed Basil Nanton collected the cheque, and recounted the events of the tragic night.

The NDP said that Matthews who made the presentation and communicated the NDP’s continued support for the Nantons.

Wishing that there was more the NDP could do, Matthews said that although the money could never compensate for the family’s loss, he hoped that it would come in useful to defray some of the family’s expenses.

Meanwhile, Eustace also pointed out that the NDP representatives and caretakers of constituencies where families suffered loss of life, would present similar assistance from the NDP to those families, as part of its efforts to assist those affected by the extreme weather.

The NDP continues to do what it can to assist those families affected by the freak December weather, the party said.