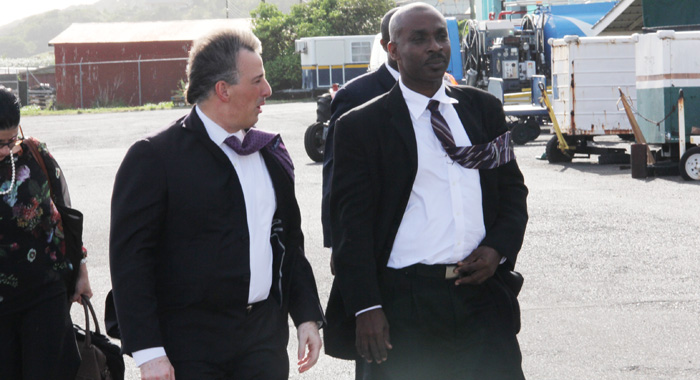 Mexico’s External Relations Minister, Jose Antonio Meade, says that while the relationship between Kingstown and Mexico City are strong, more can done to make it systematically closer and add many other sectors beyond government, students, business and cultural exchanges.

He made the point during an official visit to this country last Friday, during which he met with Prime Minister Ralph Gonsalves.

Meade visited this country as part of a tour of the three Windward Islands that were affected by the Christmas Eve floods.

He also said one of the items on the tour’s agenda was to solicit support from this country for the upcoming CARICOM/Mexico summit.

On Thursday, he visited Dominica then moved on to St. Lucia on February 7.

On Friday, Meade held private talks with Prime Minister Gonsalves, following which the media was briefed on the outcome of the talks.

Gonsalves said this country had excellent relations with Mexico which were further deepened when his government came to office, in March 2001.

He said he met Mexican President Enrique Pena Nieto in Cuba while attending the meeting of the Community of Latin American and Caribbean states (CELAC) earlier this month.

Nieto expressed solidarity with the countries affected by the Christmas floods and demonstrated this by sending the External Relations Minister to tour the affected islands, Gonsalves further said.

He also announced that he will attend the CARICOM/Mexico Summit and the meeting of the association of Caribbean states in Yucatan Mexico in April.

Gonsalves, who is also chair of CARICOM, said the association of Caribbean States was a very important vehicle for Caribbean integration beyond the CARICOM borders.

He explained that the association of Caribbean states consisted of countries “washed” by the Caribbean Sea and focused on trade, transport (air and sea), technology, including information technology, tourism and climate change.

The Prime Minister said Mexico developed a very good “people to people” relationship through the young students who go there to study.

He also noted the assistance Mexico had given with the preparation of the 30-year master plan for the development of the Argyle International Airport over that period, adding that he hopes that Mexico continues as a strategic partner in the operation and management of the airport.

Gonsalves said under the new president, Mexico had shown interest in strengthening relations not only with Latin American countries, but also those of the Caribbean and it was expected that Mexico would be the Caribbean’s interlocutor at G8, World Bank, and International Monetary Fund (IMF) meetings.

“Mexico is a country of 110 million people, the 10th largest economy in the world. It’s one of the Latin American giants, and one of the emerging markets, also a country of immense strength and influence,” Gonsalves said.

“And for our small island states in the Eastern Caribbean we can hardly find a better interlocutor at these for than Mexico,” he further stated.