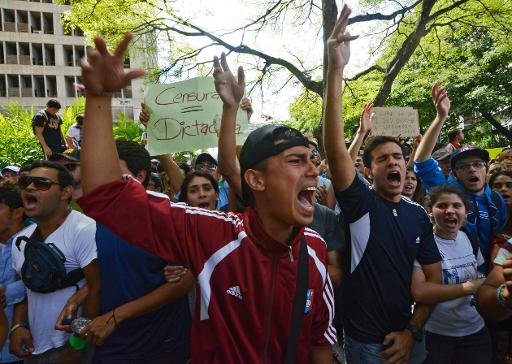 Students take part in an anti-government protest in Caracas on February 17, 2014 (AFP photo by Juan Barreto)

Prime Minister Ralph Gonsalves has spoken in support of the Government of Venezuela amidst mass protest by the opposition in Caracas, calling for the Nicolas Maduro administration to go.

Protestors are demanding Maduro’s resignation over issues ranging from inflation and violent crime to corruption and product shortages.

Gonsalves on Tuesday spoke against what he said were efforts to destabalise the presidency of Maduro, who was elected after the death of Hugo Chavez last March.

The Vincentian leader, who is also chair of CARICOM, spoke hours before the regional bloc issued a statement saying it is “concerned by the confrontations” in Venezuela over the past few days in the course of demonstrations.

At least four people have died in the protest and CARICOM said it “deplores the deaths … arising from the resulting acts of violence.

“The Community calls for respect for the democratically elected Government of the Bolivarian Republic. In all democracies, citizens have the right to air their views and differences, however, this must be done within the constitutional framework and not through violent demonstrations.

“No democratic society can reasonably pursue disorder or any unwarranted subversion of democratic institutions.

“CARICOM calls on all parties to take the necessary steps to refrain from any further action that would hinder a peaceful resolution of the differences and a return to peace and calm in the country,” the statement said.

Meanwhile, Gonsalves said he was scheduled to meet later on Tuesday with the Venezuelan charge d’affaires in Kingstown and that the Minister of Foreign Affairs in Kingstown was sending to Caracas “a statement of solidarity with the government and people.

“We just can’t have attempts to destabilize a government which has been duly elected. The man won the presidential election — President Maduro. They just won overwhelmingly the local government elections, the state elections.

“What you can’t win by the polls, you want to win it by subterfuge and violence and illegal behavior? “That can’t be accepted, and the government of St. Vincent is in solidarity with the government and people of Venezuela on this matter and we are asking for calm, restraint on all sides and let the constitutional process, the legal processes function,” Gonsalves said.

Caracas on Monday gave three U.S. Embassy officials 48 hours to leave the country, accusing them of supporting opposition plots to unseat the government.

The opposition leader in Caracas, Leopoldo Lopez re-emerged Tuesday from days of hiding and surrendered to police. Lopez was being sought by authorities for allegedly inciting violence that broke out during protests last week.

He said his surrender will open Venezuelans’ eyes to the increasingly authoritarian bent of their government.