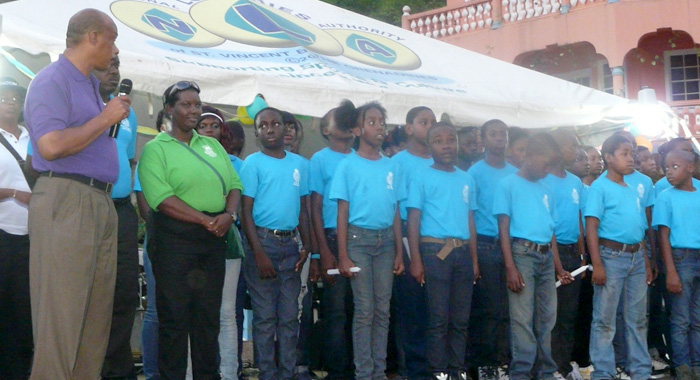 Deputy Commissioner of Police, Reynold Hadaway, officially declares the Spring Village Police Youth Club as one of the clubs of the Royal St.Vincent and the Grenadines Police Force.

Delivering remarks, Deputy Commissioner of Police, Reynold Hadaway, spoke of the history of Police Youth Clubs in St. Vincent and the Grenadines and lauded former inspector of police, Arden Tannis and for superintendent of police, Bertram Cumberbatch for the efforts that they played in establishing clubs in Barrouallie and Calliaqua, respectively.

“Commendations are in order for these pioneers of our PYC’s,” Hadaway said. He also commended Sergeant Cecile Mc Master, the National Coordinator of Police Youth Clubs for the role that she has played in being the steward of the organization since November 2011.

Hadaway said the RSVGPF, in its efforts to ensure continuity, a few weeks ago appointed Corporal Loraine John to the post of Deputy Coordinator of Police Youth Clubs, having served as coordinator for the Rose Hall PYC.

Hadaway said, “As we aim to assist in the holistic development of the nation’s youths in collaboration with the National Commission on Crime Prevention, social organisation and government institutions, it is our hope that as we strive to make a positive impact in their lives through sporting disciplines, training, cultural and educational activities that they will realize their true potentials, thereby allowing them to live a purposeful, productive and crime free lives.”

Hadaway siad the stigma, the negative impact that crime has on individuals and the society alike is known to all. Against this backdrop, he said every effort must be made to ensure that youths do not embrace a life of criminality.

“Every individual that we steer away from criminal activities is one individual less to prosecute, its one crime less to investigate. This is our ultimate objective.”

He said over 3,000 lives have been directly impacted by the Pan Against Crime Programme and the PYC. He added that many members have gone a step further and have now joined the ranks of the RSVGPF, and there are many more in-waiting.

“They must have seen something good during their time as members of these programmes.”

Howard, who is now stationed at Vermont Police Station, has started a PYC in that community. The Spring Village Police Youth Club is the 25th PYC launched in St. Vincent and the Grenadines.

Representatives from the RSVG Police Force, National Commission on Crime Prevention, the Youlou Pan Movement and the Government also attended the event.