Gift of house in the offing as paralysed woman turns 21 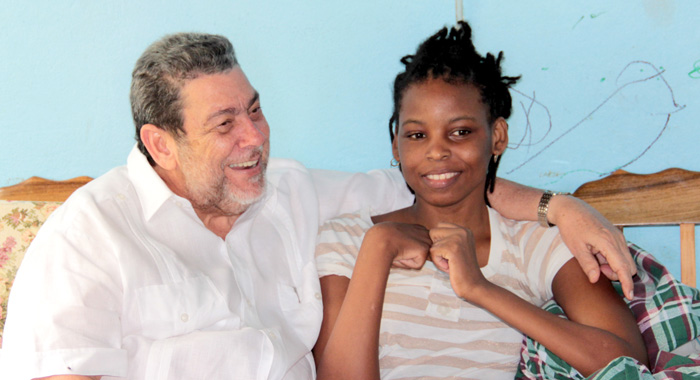 The Government has identified land in Fitz Hughes and will soon start building a house for 21-year-old Sweet-I Robertson, the Chateaubelair resident, who has been paralysed from the waist down, after having been struck in the neck by a stray bullet three years ago.

Robertson suffered permanent injuries in October 2010 during an altercation between some young men in Petit Bordel following an event at the Petit Bordel Secondary School.

Prime Minister Ralph Gonsalves, who has taken a personal interest in Robertson’s welfare, visited her on Saturday to mark her 21st birthday, which was on Feb. 15.

After leaving Robertson’s home, Gonsalves visited the area in Fitz Hughes where construction has begun on six of several houses to be built in that North Leeward community for persons to be relocated as a result of damage to their homes in the December 2013 floods.

He told journalists that a special house would be built in that same area for Robertson.

Gonsalves told I-Witness News that while his Unity Labour Party government has been providing a lot of care for Robertson and has made adjustments to her current home to better suit her circumstances, the house does not belong to her family.

“So her physical circumstances have improved, … but that is not her house,” he said, adding that a two-bedroom house will be built for Robertson as a gift from the government.

“… and this one, I have told [Housing] Minister [Montgomery] Daniel, has to be properly designed, because it is a paraplegic who is going to live in it,” Gonsalves said, pointing out the lot where the house will be built for Robertson.

Robertson told I-Witness News that she is pleased with the efforts of the government to assist her, saying, “It has taken off a lot of burden off my family.”

She further said she is grateful for the Prime Minister’s efforts in particular.

Last year, the government arranged for Robertson to receive treatment in Cuba.

She spent three months in the Spanish-speaking Caribbean nation, where she received therapy daily.

When Robertson went to Cuba, she had only limited motion in one of her hands.

Now, she has full control of her upper body, and can move both hands and arms.

The stiffness and numbness in her upper body is gone, she told I-Witness News.

The experience in Cuba has helped her self-confidence, Robertson also told I-Witness News.

Robertson was a fifth form student and a star athlete at Petit Bordel Secondary School when she was shot.

In 2011, she passed four of the five CXC O’Level subjects that she sat and received a Grade 1 in mathematics.

She said she is now thinking about other subjects that she would like to attempt.

In December 2013, then 23-year-old Shelton Hooper was sentenced to five years’ imprisonment for wounding Robertson.

Shelton and his brother, Sheldon Hooper, then 28, along with their cousin, Roland, then 26, were each sentenced to 12 years imprisonment for the attempted murder of Lesroy DeGrads.

Shelton was also sentenced to five years hard labour on two charges of possession of firearm with intent and unlawful use of firearm.

Robertson told I-Witness News that she has forgiven the men for the harm they have done to her.

She said that one can never know how things will be in life. “You can’t hold a grudge forever,” she told I-Witness News on Saturday.

Gonsalves has used Robertson’s case to highlight the impact of years of unregulated trade in weapons.

In March 2013, he told a regional workshop on negotiations for the United Nations Arms Trade Treaty that Robertson’s case was a “symbol of the creeping scourge of arms and ammunition into the most remote corners of our Caribbean civilization”.

Gonsalves told I-Witness News on Saturday that Robertson “bears her misfortune with equanimity and grace”.