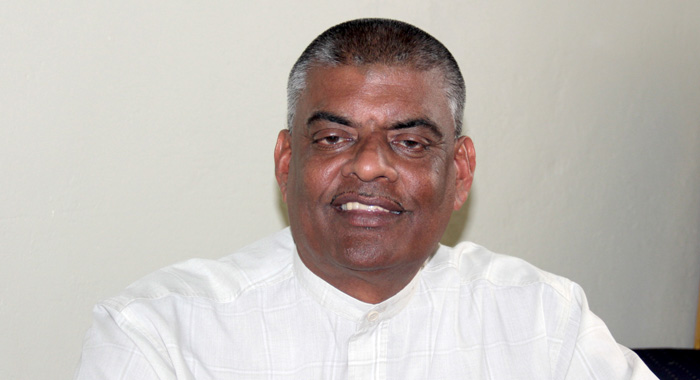 “The Prime Minister did ask me a question as to his (Augustus’) relationship with the church and I did indicate that he did resign from his substantive position,” Baptiste told I-Witness News on Friday, breaking the silence of the SDA Church on the recall of the diplomat.

Augustus, who himself is a former district pastor with the local SDA church, was recalled on Feb. 7.

The Ralph Gonsalves government has said that Augustus confessed to accepting money from persons in New York and promising to help them to secure U.S. Permanent Resident Cards — Green Cards.

Three months before his appointment, Augustus resigned from the ministry, but declined to comment on certain allegations about him at the time.

Baptiste told I-Witness News that Gonsalves did not inquire about why Augustus had resigned as a pastor.

“He (Gonsalves) inquired as to whether I think he (Augustus) would be a good candidate for the position, and I did indicate to him that he was not under discipline, was not under censorship, and, therefore, from my end, I see no reason why he could not,” Baptiste said.

In his letter to the church in February 2011, Augustus said he was resigning as a pastor “for personal reasons,” Baptiste said.

“We do not have on record any specific reason for his resignation,” he said, but added that the church accepted the resignation.

Baptiste said that at the time, the affairs of the local SDA church were being administered by the Caribbean Union Conference in Trinidad. Augustus had submitted his resignation to the conference, and its executive committee accepted the resignation.

Baptiste was a member of that committee, but said he “was not there when that matter came up”.

He said that the SDA Church has had persons who resigned from the ministry before, some of whom have changed professions..

“Whenever such occurrences happen, the church adheres to the request or the desire of the individual,” he said, adding that he did not find Augustus’ resignation “was really surprising.

“I think he had ambitions of serving in another capacity and we were not totally surprised at his resignation,” Baptiste added.

Opposition MP, St. Clair Leacock said at a press conference on Feb. 19, that the allegations against Augustus was that Augustus had difficulty with accounting for financial matters in the church … and that he had problems that were inconsistent with his position as a preacher interfacing with the female gender in the church…”

Baptiste said the church has “no evidence” of sexual impropriety on the part of Augustus, but added that he has heard allegations “on several call-in programmes and what have you.

“But as to anything specific coming to the attention of the church, no,” Baptiste said.

Augustus has also been referred to as “Sexy Pastor”, a reference Leacock also used when he spoke on Feb. 19.

Baptiste said he has also heard that term on radio.

“I personally haven’t heard any individual refer to him in that way, but I think it has been bandied around and perhaps on some of the local programmes, call-in programmes, but I cannot vouch for that.”

Upon being asked what does the name “Sexy Pastor” suggest, Baptiste said, “I am not sure; I would not want to read into it.”

Baptiste further told I-Witness News that he was “not aware” of any misappropriation of funds.

Regarding his view on the actions of Augustus, Baptiste told I-Witness News: “The Seventh-Day Adventist Church believes in the highest moral, ethical standards and anything contrary to that, the church looks upon it as unbecoming.”

Regarding the impact of the developments surrounding Augustus on the membership of the church, Baptiste said: “The church is really a spiritual organisation; it is in the business of healing and not hurting, in the business of restoration and not condemnation, and the best of us, we make errors, we make mistakes, but we understand that God is a forgiving God and the church continues to pray for him and his family as well, who is also hurting as well.”

Asked about the reaction of the public to the SDA church in the wake of the developments, Baptiste told I-Witness News,

“I guess in situations like these, people will form their own opinions; the church is going to triumph and I believe that once God is leading and directing his words that the church will be vindicated.

“As a church, we continue to hold to our mission, our philosophy, that we should preach the everlasting gospel to every kindred, nation, tongue and people; and I believe that situations of this kind, the devil will use to rupture the church or cause it to be reproached, but, at the end of the day, the church belongs to God, he is the head of the church and he will guide the church safely and triumphantly through whatever stormy waters might be ahead.”

Pastor Clive Dottin, a Trinidad-based Adventist pastor has also told I-Witness News that Gonsalves consulted with him ahead of Augustus’ appointment.

Dottin said he told Gonsalves that he thought Augustus would have made a good envoy and is shocked by the development.

The Prime Minister, however, said he would not disclose the views of the two Cabinet members.