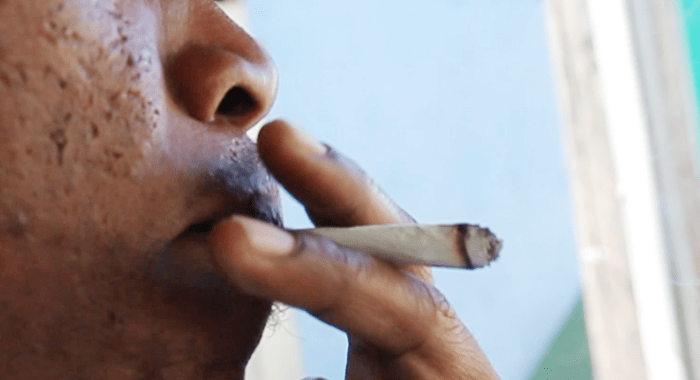 Randy Delplesche, a 27-year-old resident of North Leeward has, in the past, bagged EC$60,000 from marijuana cultivation.

And, he is excited by the prospect of marijuana being decriminalized within CARICOM — even if only for medical purposes.

“I think it is a good vibes,” Delplesche told I-Witness News.

“That is what I plant to live by,” the unemployed man said, adding, “No work is going on in the country, so we have to look to do something else. That is the only thing we can do and make a little money.”

Chair of CARICOM, Prime Minister of St. Vincent and the Grenadines, Ralph Gonsalves, noting similar steps in the United States, has asked that CARICOM discuss the decriminalization of marijuana for medical purposes.

And when CARICOM Heads of Government meet here on Monday and Tuesday, medical marijuana will be on the agenda — along with weighty items, such as deepening the regional integration movement and resolving issues relating to freedom of movement within the 15-member regional bloc.

The summit comes three months after extensive devastation in SVG, St. Lucia and Dominica by a trough system on Christmas Eve, and low rainfall in Antigua and Barbuda currently.

Climate change and disaster preparedness will also rank high on the agenda.

“We have to address, in a more focused manner, climate change and disaster preparedness — all the dimensions of it. And that is a big item of practical importance,” Gonsalves told I-WITNESS NEWS.

The two-day meeting will also focus on crime and citizen security and also hopes to sign off on some matters regarding CARICOM’s trade agreement with Canada.

It will also discuss reports from CARICOM’s transport and economic commissions.

Among the newer items on the agenda for CARICOM heads is the report on the regional commission on reparation, and medical marijuana.

“Medical marijuana is important, but it doesn’t have the importance of say, climate change or the nature of the economy and the responses to the global economic crisis,” Gonsalves said.

He told I-Witness News that apart from what is happening in the United States, where 20 states have decriminalized marijuana for medical purposes, the White House is putting measures in place to permit the medical marijuana industry to use U.S. banks to conduct their trade.

Gonsalves further mentioned MediCanja, the medical marijuana company that has been set up in Jamaica, where the government has announced that it will decriminalize the possession of small amounts of marijuana by year end.

Even if Jamaica does not meet that target, “they have proceeded apace and I have no doubt that all these developments are having an impact,” Gonsalves said.

He further noted that newspaper editorials in Jamaica have supported the move towards medical marijuana.

But here in SVG, Gonsalves has not received any such support from the parliamentary opposition.

“From my perspective, the question of medical marijuana at this time is a non-issue,” Opposition Leader, Arnhim Eustace told I-Witness News, adding, “… we have a lot of difficulties in this Caribbean to deal with right now, including in St. Vincent and the Grenadines, of an economic and financial nature and that is where I think our emphasis should be.”

Eustace, an economist, former prime minister and minister of finance noted the legalization of medical marijuana in some parts of the United States.

He, however, added, “I think we need to grapple with those things that are critically important to our economies and our societies right at this time.”

Further, in Grenada, the government has insisted that the cultivation and use of marijuana on there is illegal, with the Education and Human Resource Development Minister, Anthony Boatswain saying, “… will abide by the laws of our land”.

He said in January that Grenada Drug Epidemiology Network and National Observatory on Drugs statistics on drug-related admissions to the Mt. Gay Psychiatric Hospital, for Jan. 1 to June 30, 2013, backed up his concerns about drug use in Grenada.

“One hundred and twenty-three patients, consisting of 118 males and 5 females, were admitted for problems derived from the consumption of drugs. Sixty-eight of these patients encountered psychiatric and behavioral disorders, due to the use of cannabinoids. This number comprised 61 males and 4 females, between ages 20 to 70 years,” Boatswain said

In Barbados, Attorney General Adriel Brathwaite has ruled out the possibility of the legalization of marijuana there.

But a lot of money is being made from the illegal trade in marijuana.

“I made about 50 grand (thousand dollars) already from marijuana –say about 60,” Delplesche told I-Witness News, adding that he used EC$25,000 to buy a car, which a friend wrecked in an accident.

There is also a lot of money being made from legal marijuana, the growth of which is expected to outstrip the expansion of the global smartphone market, according to the State of Legal Marijuana Markets, a report released in the United States last year.

A few years ago, Gonsalves described as “rubbish” the statements by some that marijuana contributes significantly to the economy of St. Vincent and the Grenadines.

Back then, he noted, instead, the burden on the healthcare system of injuries resulting from the illegal trade, and the strain on law enforcement and the judicial system.

But today, he is calling for foresight regarding medical marijuana.

“One of the problems that I foresee is that if we don’t address this, and even if we address it now, there’s still the great danger that in the next 10 years, we will be buying pharmaceutical products involving marijuana from the great US of A.

“We may well find that a cross border trade taking place where we are put at a disadvantage,” he told I-WITNESS NEWS.

The prospect of medical marijuana in SVG and CARICOM has excited longtime activist for the decriminalization of marijuana, Junior “Spirit” Cottle.

“I compliment it. It is a marvelous step,” he said, adding that marijuana is “a healing herb and, for years, it has been kept away from people who need it.

“And if it comes on board, we have to take advantage of it,” said Cottle a former head of the now defunct Marijuana Growers Association.

Cottle said that while he is not sure how much benefit, financially, can be derived from medical marijuana in the region, there are examples from further afield.

“The bigger countries like the United States, Canada, they are already into it. And let us see what advantage we can take by using the herb for medicinal reason and other reasons also, like recreation and industrial; but we take it one step at a time,” said Cottle, who made it clear that he supports the decriminalization, rather than the legalization of marijuana.

“Knowledge is progressing … and I am not surprised that the benefits of marijuana have come forth. So, let’s just embrace it. I know from my own knowledge of herbs that marijuana has had some therapeutic value, but I never expect the day when it would become so widespread and so acceptable.”

But it might be some time yet before Vincentians see the decriminalization of marijuana for medicinal purposes.

“It is very difficult to do it single state, particularly a state as small as St. Vincent and the Grenadines,” Gonsalves told I-WITNESS NEWS.

“But, if we do it as CARICOM, even if every country doesn’t do it at the same time but there is a decision that we can do it, it makes it easier for it to be done.

“For instance, we share experience with Jamaica. Jamaica is far advanced in terms of medical marijuana,” he said.

Gonsalves, however, said there is “a healthy debate” taking place about the issue, adding that this is what he called for — “a rational discussion on the question”.

But while Delplesche, the resident of North Leeward, knows of the money to be made and is pleased with the move towards medical marijuana, he is also wary of government involvement.

“If the government has to step in, you might have to plant it in a smaller portion and eat smaller,” he told I-Witness News.

One reply on “FEATURE: Regional leaders to debate medical marijuana”