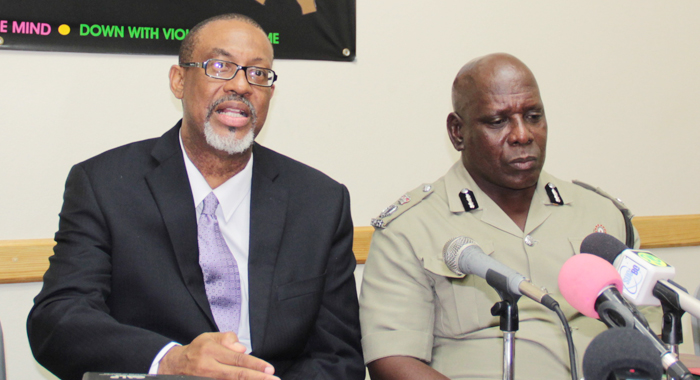 Director of Public Prosecution, Colin Williams, left, and Commissioner of Police, Michael Charles, at the launch of the booklet. (IWN photo)

The nation’s law enforcement and judicial officials now have a quick reference guide to some of the most common criminal offences.

The pointers are compiled in the booklet, “Points to Prove”, produced by the National Prosecution Service.

Tammika Mc Kenzie, a Crown Counsel at the Office of the DPP, explained that during her stint at magistrate’s courts, a lot of charges were coming to the court “and all the legs of the offences were not properly established”.

Mc Kenzie said that at the same time, Dan Suter, criminal justice advisor to the Eastern Caribbean Project, funded by the US Embassy in Barbados, had similar observations and raised the idea of the booklet with the DPP.

“And, in essence, what is contained herein, are the elements of each of those offences. The idea is each police officer would have one of these as a reference point,” Mc Kenzie said.

She said that at law school most students are exposed to “nutshells”.

“So, this, in essence is intended to be a police version of the nutshells here for our Royal St. Vincent and the Grenadines Police Force, …” she said.

Mc Kenzie added that the booklet also contains certain guides, including powers of arrest, the Judges’ Rules, and tips on what to look for and follow up on while questioning suspects.

Meanwhile, the DPP said that the booklet speaks to offences such as crime against property and the person, sexual offences, in addition to newer offences, such as money laundering and human trafficking.

Meanwhile, Commissioner of Police, Michael Charles, thanked the DPP and his team for producing the booklet.

“And this will definitely aid us to solve any kind of crime in St. Vincent and the Grenadines,” the police chief said.