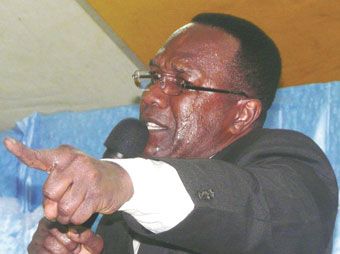 “When you compare yourself with others, you will become vane and bitter for always there will be greater and lesser people then yourself.” — Max Ehrmann

As a member of the international body of the Seventh-day Adventist (SDA) church, I feel at liberty to address this topic. Through Adventism, I was exposed to a level of hypocrisy that is of the highest order. Hypocrisy so advanced that Jesus Christ would have called the church and its leaders out on it. Like most religions, every once in a while, a rough minister will pop up among the clergy of the (SDA) Church, and, like the Catholic Church, the leadership of the SDA church will try to keep the dirty details of the rough minister’s behaviour, be it illegal, immoral, unethical, etc., from reaching the public. As a result, the rough minister will be quietly transferred to a different island, district or church to continue his unsanctified behaviour, creating new victims.

Pastor Edison Augustus was one such rough minister. For most of Augustus’ pastoral career, he has been committed to an involvement of activities that would have caused the ordinary members to have been “readout of the church”, this does not say much to the standard of the clergy. Anyone who has the time and chooses to follows the path of Augustus’ pastoral career, maybe shocked to find a path littered with broken marriages, broken hearts, broken homes, included that of his own, and a range of other un-biblical and un-Christian activities. Here we have a man who was instrumental in destroying the very things he was hired and ordained to build and to restore. I often asked, why was Augustus allowed to get away with such behaviour for so long?

In the same manner Pastor’s Dermott Baptiste, the president of the St. Vincent and the Grenadines Mission, and Pastor Clive Dottin, a senior and influential pastor in Trinidad and Tobago, both of whom knew of Augustus’ track record, yet they choose to stick their necks out, lied on Augustus’ behalf to facilitate his appointed in an international diplomatic posting. It is in the same manner and for many years, these men, and others, have been instrumental in protecting Edson Augustus, in the name of avoiding a church scandal. For many years, they have facilitated Augustus’ ungodly behaviour, and the creation of many victims.

How can pastors Baptiste and Dottin recommend Edison Augustus for a diplomatic posting, when he (Augustus) have consistently demonstrated by his actions that he does not fear, respect and or love the awesome creator Yahweh, the God he vowed to faithfully serve, the God Baptiste and Dottin claim to love and fear? This is a man who has over and over again, demonstrated a lack of respect for the rules, doctrines and principles of the church that employed him and the law of the land wherein he operated. Knowing what they (Dottin and Baptiste) knew, how could these so-called men of the clergy, acting under the inspiration of a holy God, recommend Augustus for such a job?

The management of the St. Vincent and the Grenadines Mission of Seventh Day Adventist had overwhelming evidence to justify dismissing Augustus from his post as pastor with the SDA churches. However, Instead of doing what was right, Pastor Dermoth Baptiste, president of the mission, decided to sweep Augustus’ misdeeds under the rug once again. As a result, instead of officially terminating Augustus employment, he was asked to resign.

I am forced to ask, how different from Augustus are these men, when they are willing to break Yahweh’s law to save the face of a church than to do what is right?

I am also forced to ask Pastor’s Baptiste and Dottin:

Is it still a sin to lie?