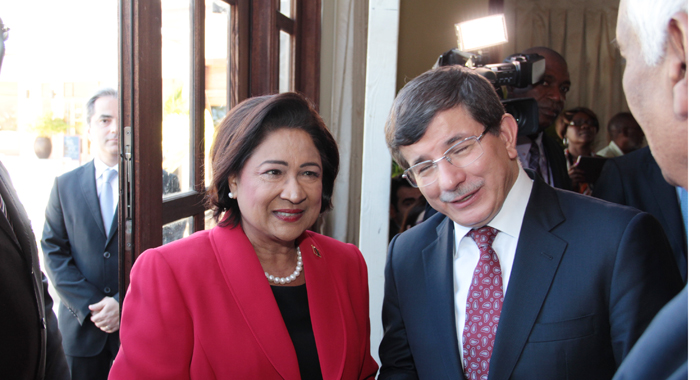 Outgoing chair of CARICOM, Prime Minister of Trinidad and Tobago, Kamla Persad- Bissessar, says eradicating crime and threats to the safety of the people of the region is “critical to our sustainability as a region is our need to work decisively”.

She told the opening of the 25th Inter-Sessional Meeting of Heads of Government of CARICOM in St. Vincent and the Grenadines on Monday that her country has proposed an amendment to the meeting’s agenda, for the ratification of the Arms Trade Treaty and support for her country’s CARICOM-endorsed bid to host the Secretariat in Port of Spain.

Persad- Bissessar said the Arms Trade Treaty (ATT) provides the region with “a significant component in the global fight against the trade of conventional arms in illicit markets”.

She noted that 116 states have signed the treating, including all CARICOM Members, except Haiti.

Eleven states have ratified, expressing their consent to be legally bound by its provisions, Persad- Bissessar said.

She further noted that for the

ATT to come into force, it requires the signatures and early ratification by 50 signatory states so that the Treaty.

“However, among CARICOM member States, only Guyana, Antigua and Barbuda, Trinidad and Tobago and Grenada have so far ratified the ATT.

“In addition, I want to urge CARICOM member States to prepare to participate, once more with an unified approach, in the negotiations that will ensue before and after the ATT comes into force.

Outstanding issues likely to impact the operationalization of the ATT need to be settled,” she further said.

Among these, she mentioned the selection and funding of the provisional Secretariat provided,

“It is, therefore, imperative for CARICOM Member States to ratify the Treaty before it comes into force if they wish to retain an influential role in the settlement of these,” Persad- Bissessar said.