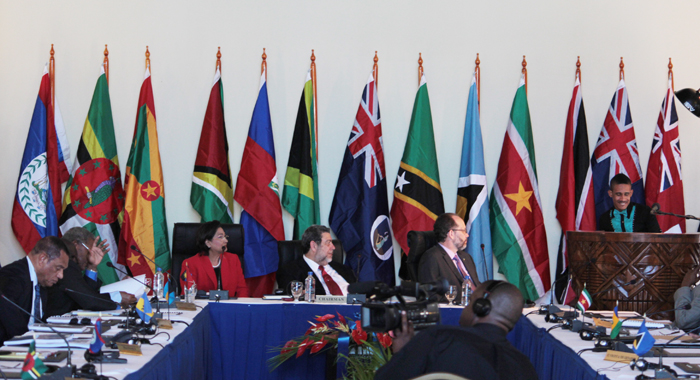 Caribbean Community (CARICOM) heads of government are expected to adopt, later on Tuesday, a budget for the regional commission on repartitions for African slavery and native genocide.

CARICOM heads have decided to seek reparation from their former colonisers, claiming that the enslavement of Africans in the region and genocide of indigenous people is having a lingering negative impact on the region’s development.

Chairman of CARICOM, Prime Minister of St. Vincent and the Grenadines, Ralph Gonsalves, told journalists Monday night that the leaders will also discuss in caucus, the engagement of the law firm of Leigh Day and a consortium of Caribbean lawyers.

“I would say that we made good progress on that issue, and, before the end of June, some approach is going to be made to the European countries in relation to this matter of reparations,” Gonsalves told journalists after the end of the first of two days of talks.

Gonsalves said that CARICOM will continue its research even as it seeks a conference with the European countries against whom the claims of reparations are being made.

He further said that Beckles’ presentations spoke to issues relating to an apology and organizing with African countries that may also want to seek reparations from Europe.

He said the issues touch and concern the post 2015 Millennium Development Goal discussion.

Fourteen CARICOM member states have set up national reparations commissions even as some Europeans countries against which claims are being made have said that they will not pay compensation for slavery and native genocide.

“We believe we have the law and the facts on our side in relation to addressing the legacy of native genocide and African slavery and we will make our case,” said Gonsalves, who is also a lawyer.

“It is a serious proposal, with serious issues, within the same context of not fighting anybody,” he said of Beckles’ presentation.

“These things never come easy but these are 14 sovereign countries representing 16 million people with a huge diaspora in the United States, in Canada, in Europe. I think we have some influence. I am satisfied and we are satisfied that we have the law on our side, and we have the acts on our side.”

CARICOM has said that it will opt for litigation if Europe refuses to negotiate.

“And then after that conversation, we will make a formal claim,” he said.

In addition to the progress on reparations, the regional heads agreed on Monday to set out a road map for a single information and communication technology (ICT) space in CARICOM and to link ICT In a coordinated manner with education and production.

“… we are a little behind the curve with ICT,” Gonsalves said, adding that the region has, however, done tremendous work over the last few years.

The leader, on Monday, received a presentation on human development, particularly education.

They have decided to set up a commission on education, similar to the one on health that has delivered a lot of benefits across the region, Gonsalves said.

The heads also received a preliminary report from the commission on the economy, including suggestions on addressing debt management and fiscal consolidation.

The meeting also received the report of the prime ministerial subcommittee on the CARICOM Single Market and Economy.

“We are addressing the built-in agenda within the Treaty and moving as fast as we possibly can,” Gonsalves said.