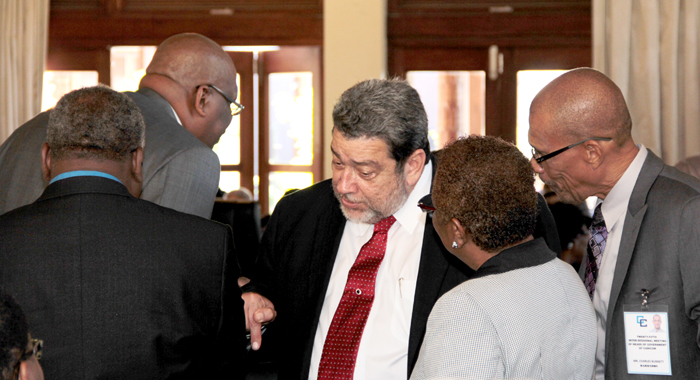 Chair of CARICOM, Prime Minister Ralph Gonsalves, chats with his regional colleagues ahead of the Heads of Government meeting on Monday. (IWN photo)

Prime Minister Ralph Gonsalves says he is hoping that the CARICOM heads of Government meeting underway in St. Vincent and the Grenadines will make more than baby steps on the legalization of marijuana for medicinal purposes.

He further said that his push for the region to debate the decriminalization of the drug for medicinal and religious purposes is not an election ploy, ahead of the next poll, constitutionally due at the end of 2015.

Gonsalves, who is chair of CARICOM, last year called for a regional discussion on the legalisation of marijuana for medicinal purposes.

He told I-Witness News on Monday morning that the CARICOM Secretariat is scheduled to present to the two-day inter-sessional meeting of CARICOM leaders, desk research on medical marijuana.

The research will include suggested alterations to the existing law which addresses proscription for social and religious uses.

“But I am hoping that we take more than baby steps in addressing the issues,” he told I-Witness News.

Gonsalves said that, in the case of St. Vincent and the Grenadines, although marijuana has in the past provided a livelihood for a number of persons, particularly “forest users”, the contribution to the economy, in his assessment, has not been significant.

He said a significant contribution rises to the level of banana during its heyday as the main sector of the economy, tourism or remittances, which represent 7 per cent of GDP.

Gonsalves further said that marijuana has no doubt contributed “here or there” to individual persons or communities in lifting themselves out of poverty and indigence.

“On my side, we haven’t seen a significant contribution of this plant,” he said.

He further told I-Witness News that given what is taking place globally, and particularly in the United States, 20 states have decriminalised marijuana for medical purposes, and seeing the extent of revenue that can be garnered by those states, he would like to see CARICOM nations move in that direction.

“Certainly, there is a case to be made to liberalize the existing harsh laws, particularly for small quantities for personal or religious uses,” he said.

He further stated that there are possibilities in the discourse that is taking place but there are also challenges which remain.

He said the federal government in the United States, “which cannot be taken for granted”, still holds the line in accordance with the United Nation’s convention on psychotropic substances — that they should not be legalised.

“So, all those are questions which will have to be addressed on an on-going basis,” he said.

But the topic of medical marijuana had not come up for discussion when the meeting of regional leaders adjourned Monday night.

Gonsalves told journalists that medical marijuana is expected to be discussed on Tuesday, the second and final day of the summit.

He noted that Colorado made US$2 million in revenue from the sale of medical marijuana.

“It’s an idea, the time of which has come,” he further told journalists.

Asked to respond to his critics who say that the medical marijuana discussion that Gonsalves asked last year to be placed on the agenda of CARICOM was an election gimmick, he said:

“I am almost two years away from an election. In any event, good policy is good politics.

“If I didn’t do it, the story would be I am afraid to do it because it ain’t good politics. The point is this, I meant I am having this conversation and wanting this mature conversation because I think it is a serious subject for discussion.

“We cannot continue, frankly with the drug policies that we have had over the years,” Gonsalves said.

“I am not talking about legalizing marijuana. The discussion is about decriminalization it in respect of medical marijuana, and very small quantities regarding use for social and religious purposes, but not to be made available for anyone under the age of 18.”

Asked if his government will follow Jamaica’s lead and move towards medical marijuana regardless of CARICOM’s position, Gonsalves said:

“Jamaica is a population of nearly 3 million and they may feel that they can move even though there is not any final agreement within CARICOM. But I am hoping that coming out of here we wouldn’t have baby steps, that there would be some steps going forward.”

He further said a poll last year showed that Vincentians are split down the middle on the medical marijuana issue.

Gonsalves said that while he does not know what will be the final decision of CARICOM, he believes there should be “a sensible mature discussion devoid of any hysteria” about medical marijuana.

He further said that 10 years ago it wasn’t possible to begin such a conversation.