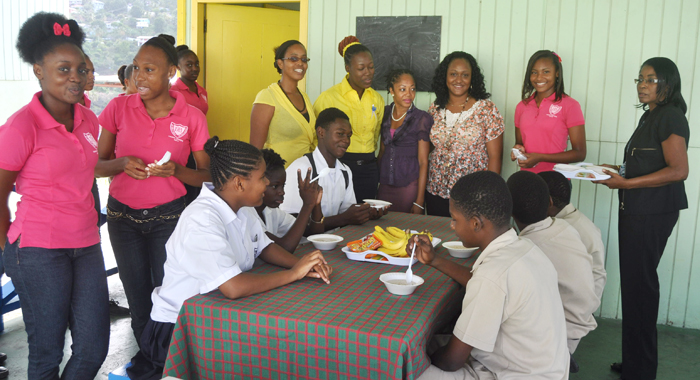 The Intermediate High School (IHS) RBC/RBTT Young Leaders began their school breakfast feeding programme on Tuesday, an initiative that principal Bernadette Slater-Peters says will benefit the students in more ways than one.

The breakfast feeding programme, which is geared towards aiding students who cannot afford a proper meal, is part of the group’s 2013/2014 Young Leaders project.

The IHS Young Leaders launched their 2013-2014 project in February at the school in McKies Hill under the sub-theme, “Socio-economic diversity — Varying family structures, collective strengths, bridging the gap to benefit all”.

The main theme is “Diversity: the 21st century Imperative”.

As part of the project, five students are being given breakfast free of charge Monday to Friday, while others are being charged $1.

Slater-Peters, who is trained in nutrition, said that apart from bad eating habits that she has observed at the school, investigations have shown that a lot of the children come to school without breakfast.

“I was very glad when the Young Leaders came up with this idea, because too many students come without eating breakfast and are unable to hold up and pay attention …

“They have a short attention span and cannot concentrate, and their general performance is low because of their situation, so providing breakfast will definitely help them,” the principal said.

Slater-Peters also said that the programme will also help to address the problem of students arriving at school later.

The students have to arrive at school before a certain time to get breakfast.

Coordinating teacher of the IHS Young Leaders, Kimberley Young-Compton, said the idea for the breakfast programme came up during a brain storming session with the Young Leaders group.

“We realized that our school had a lot of under privileged children who came to school without breakfast. If they are hungry, they can’t focus and breakfast is said to be one of the most important meals of the day, hence this programme,” Young-Compton said.

She added that the programme is well received and the students look forward to the breakfast.

Meanwhile, president of the IHS Young Leaders, Orlicia King, said that her classmates usually consume a lot of carbonated beverages and fried foods and she is hoping that the programme can also address this issue.