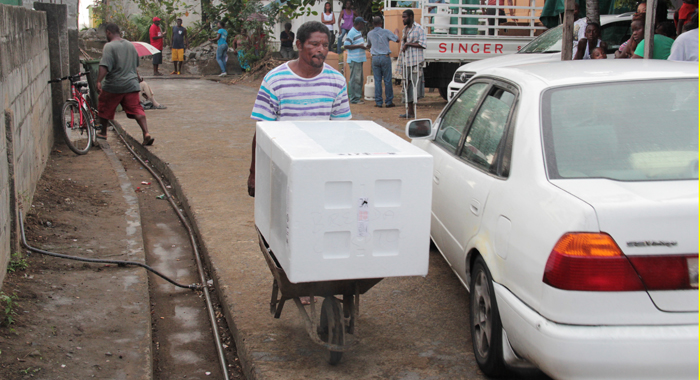 A man uses a wheelbarrow to move one of the stoves donated to disaster victims in Buccament Bay on Friday, Jan. 24, 2014. (IWN image)

Some 606 families have been “touched” by the fridges, stoves and mattresses distributed as part of the recovery effort after the Christmas floods, which damaged or destroyed 662 houses, representing EC$7 million in damage and loss.

Minister of Transport and Works, Sen. Julian Francis, who is responsible for the distribution, told a press conference on Monday that the work is “almost complete on that exercise”

He said 186 fridges, 246 stoves, gas cylinders and regulators, and 597 mattresses were distributed.

Digicel, a telecommunications provider, has committed to replacing the fridge, stove, and mattress of every person who lost these items in the Christmas floods and landslides.

Francis said the EC$775,000 spent so far included the cost of replacing the freezer, coolers and stoves lost by small businesses.

“We only gave fridge, stove and mattresses to persons who suffered damage to those items. … It doesn’t mean that because water run through your house you were assisted,” he said.

Francis said he has discussed with Prime Minister and Minister of Finance, Dr. Ralph Gonsalves, the possibility of getting another US$100,000 to complete the exercise.

“Because there are still some areas and some that we have to maybe revisit with some of the individuals,” he said.

Francis reiterated that the appliances and mattresses were purchased from local suppliers and that the distribution was done publicly.

One reply on “606 families ‘touched’ by fridges, stove, mattress distributed after Christmas floods”