Vincentian journalist to participate in US gov’t sponsored leadership programme 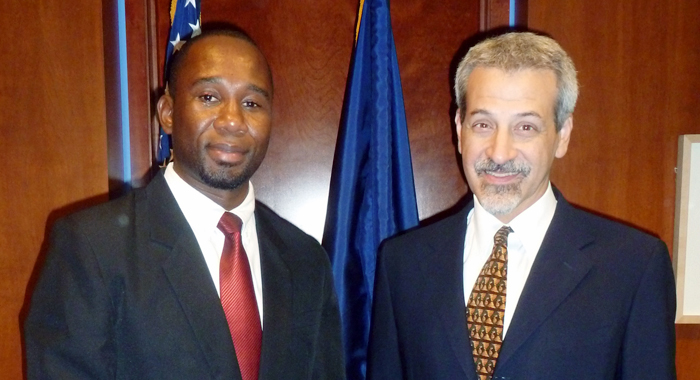 Executive Editor of I-Witness News in St. Vincent and the Grenadines, Kenton Chance, left, meets with U.S. Embassy Bridgetowns Deputy Chief of Mission, Christopher Sandrolini in preparation for his participation in the U.S. Department of States International Visitor Leadership Program.

Vincentian journalist, Kenton X. Chance will go to the United States this month as the latest Eastern Caribbean candidate of the U.S. Department of State’s International Visitor Leadership Program (IVLP).

Chance is the Executive Editor of I-Witness News in St. Vincent and the Grenadines. He will take part in a three-week, multi-regional project on promoting civil society through new media with 22 other candidates from around the world. United by their professional pursuits, the participants are a diverse group, hailing from as far as Australia, Bosnia and Herzegovina, Moldova, Russia, Sudan, and Egypt. The programme offers the opportunity for this varied group to network with professional counterparts (both U.S. and international) in order to increase information sharing.

Chance’s participation in the programme will provide him with the opportunity to examine a variety of new media and social networking tools. In addition, Chance, along with his colleagues, will explore citizens’ rights and responsibilities in civil society in the U.S., learn how new media can be used to promote transparency and accountability in the public and private sectors, and understand how to encourage citizens to become discerning consumers of online content. The programme, which begins on March 24, will include travel to at least six cities across the United States, beginning formally in Washington, DC. The national itinerary will also include stops in New York, New York; travel in smaller groups on city splits to Atlanta, Georgia; Dallas, Texas; Pensacola, Florida; Sacramento, California, and will conclude in San Francisco, California on April 11.

The IVLP is the Department of State’s premier, professional exchange programme. The program brings together emerging leaders in their respective professions to learn how U.S. experts in that profession operate and to share best practices with the other programme candidates who hail from the same region and across the globe.