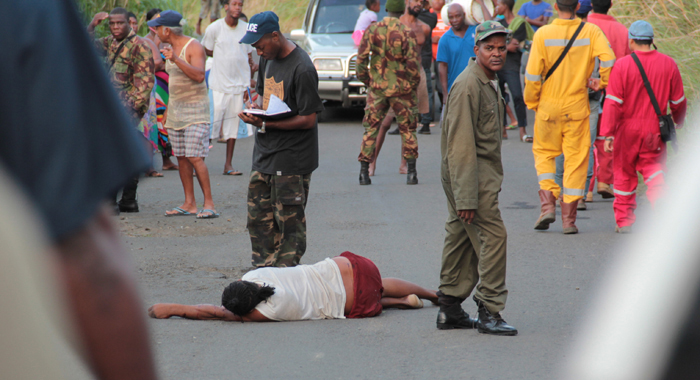 Police officers conduct investigation as the body of Nolly Jack lies on the road in Lowmans Bay. (IWN photo)

Homicide detectives were summoned to Lowman’s Bay early Saturday morning, where the body of Nolly Jack, 45, was found lying in the road toward the beach and power plant.

Jack is believed to have been murdered, the second killing this week.

He is said to have gunshot wounds about his body.

Jack was barefooted and a pair of slippers was in the road several yards away from his body.

Persons speculated that he might have tried to evade his assailant.

Jack’s girlfriend Lynda Thomas, and their two young children, one of which is a toddler, were among onlookers from outside the police cordon as detectives conducted initial investigations.

Jack is the brother of another homicide victim, Ingrid Jack, who, along with Marva James, was shot and killed in Campden Park on Sept. 13 2011.

Ingrid’s husband, George “Chocolate” Franklyn has been charged with murder in connection with those killings.

Nolly’s death brings to seven the number of murders here this year.

On Monday, a masked assailant shot and killed 24-year-old Kwasi Ryan in his yard in Paul’s Lot, Kingstown.