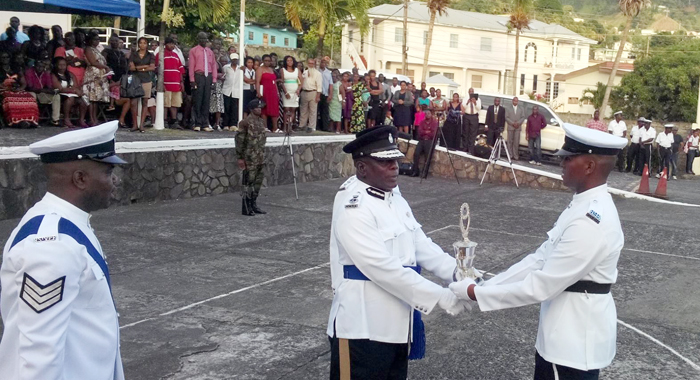 The 57 recruits who became full-fledged police officers on Thursday have been urged to be discipline at all times, since misconduct can cost them their career.

Commissioner of Police Michael Charles made the point at the 32nd Passing Out Parade at the Police Training School in Old Montrose.

Charles, who was addressing his first Passing Out Parade as police chief, said that he recently fired because of “misconduct” a police officer who would have celebrated next year 20 years as a member of the Royal St. Vincent and the Grenadines Police Force.

He did not elaborate, saying only, “I will leave it at there for now.”

Charles told the new constables, who were graduating after seven months of training, that ill discipline will not be tolerated in the Police Force.

“Just as a great deal of authority has been given to you by virtue of your profession, so too has a huge amount of responsibility has been placed on your shoulders,” he said.

He noted that through arrest and detention, police officers have the power to take away persons’ freedom, adding that this should not be taken lightly.

“The decision you make in the space of seconds could have far-reaching consequences for you, other persons, and the organization.”

Charles, however, said that that the new police officers have been adequately prepared to shoulder their responsibilities.

Discipline, he said, is the cornerstone of policing.

“You can only succeed if you are highly disciplined, with an upright character. Without discipline, you will never achieve anything….

“You are there to protect and serve and you must ensure that every person who enters your station leaves satisfied, having been assisted and supported efficiently and professionally.”

Charles further noted that as part of the government’s “education revolution”, EC$500,000 is available annually for police officers to pursued training.

He urged the officers to take advantage of the opportunity, saying, “Police officers ought to be professional individuals working within the ambit of the law…”

One reply on “Having fired 19-year veteran for ‘misconduct’, police chief urges new officers to be disciplined”