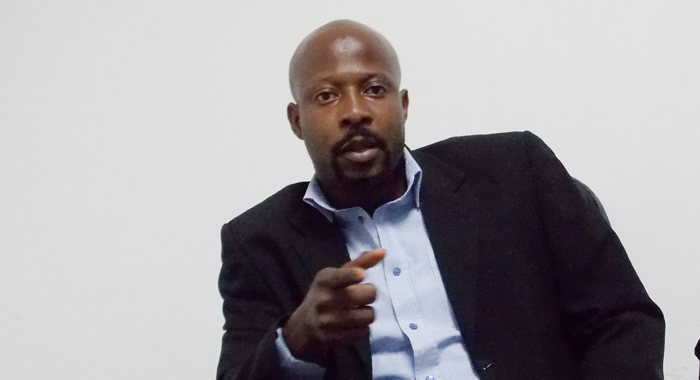 Lawyer and potential North Leeward candidate for the ruling Unity Labour Party (ULP) Carlos James says he is calling on the MP for the area Roland Patel Matthews to stop politicising the death of Chateaubelair resident Sylma “Codo” Thomas.

Thomas died on Feb. 28, one day after she fell ill as police conducted a search at her home.

The incident has sparked numerous comments from residents and has been a subject of discussion on talk radio.

Commissioner of Police Michael Charles says retired head of the Criminal Investigations Department, Willisford Caesar, has been appointed to head an investigation into the case.

James said in an interview this week that his call is in response to Matthews’ commenting that James failed to sign a petition calling for an inquiry into Thomas’ death.

James said that he was invited to an event in North Leeward to speak at a youth group’s programme, “Culture Fest”, held in Chateaubelair last Saturday to celebrate National Heroes and Heritage Month.

He said that at the end of the programme he was approached by a young lady who was “seated next to Patel Matthews, in the presence of Patel Matthews.

“She approached me asking whether or not I had signed a petition calling for an inquiry into the death of Miss Thomas. I asked the young lady whether she was aware that there was a commission set up to investigate the matter. She said ‘no.’ I further asked the young lady if she was aware (that) the person heading the inquiry was independent of the Police Force. She said ‘no.’ I then asked the young lady if the purpose of the petition is to call for an inquiry and if there has already been a Commission set up … to investigate the matter then if there is the necessary need for the petition. She rightfully agreed with me and said she was unaware of a commission (having) been … established.

“So, I told her ‘You have to find out about these things first before going around with questions/signatures for something that has already been established,'” James stated.

The ULP hopeful said he told the woman she was setting up a petition to ask for an inquiry when a commission has been set up and I being headed by someone who is independent of the Police Force.

James further said he told the woman he believes Caesar would investigate the matter thoroughly.

“So, it clearly means that the police has addressed the issue as in that there is in fact an investigation. And this is someone going around asking for a petition unknowing that there’s actually an investigation on-going,” James said.

James said that as far as he was concerned the matter was done and settled there and then but then he got word the following day that Matthews had posted on Facebook that he had refused to sign the petition.

James said that he was one of the first persons who went to Thomas’ family members to extend his condolences even before Matthews visited them.

He said he urged the family to go to the Police Public Relations and Complaints Department to make a report and he then telephoned “a senior commanding officer” of the Police Force who agreed that they should do so.

James said he is a trained lawyer and sensible enough to know the matter was under investigation. He said the family members have retained the services of a lawyer and therefore it was not for him “to comment on the incident which led to the death of Miss Thomas until a full investigation has been carried out.”

He said that for the very reason that the family may want to take “further action” on the matter he “cannot by way of sub judice comment on the matter.”

He said he was urging the family members to be patient and allow the matter to be investigated, adding that he was “saddened” by Thomas’ passing and he has “reached out” to her family.

“But for Patel Matthews to go on social media and make these assertions, fully well knowing an investigation has been launched and there is a inquiry into the matter is irresponsible and it shows that he has no decency and he does not possess the qualities and character to hold … the position as a Member of Parliament.

“I am quite concerned that he wants to push a political agenda relating to the passing of Miss Thomas. To even mention the word ‘Codo’ or Miss Thomas and politics in the same sentence — and by politics, he is referring to my name Carlos James, ULP hopeful for North Leeward — to even mention that in the same sentence and especially coming from the mouth of an MP, is irresponsible and distasteful,” James said.

“We have to raise the bar here in St Vincent with the type of person who we put to represent us in Parliament. We want quality persons to represent us as MPs. And the utterances of Mr. Matthews are highly irresponsible and is a clear sign that he is not fit to be in the position that he is as an MP – Member of Parliament.

“So, I am quite frankly disappointed that he would want to mix politics or to use the passing of the lady to fuel his political agenda.”

James said he had “refused to comment on the matter” earlier but he was “forced to comment now” because of the fact that he had been “dragged in to this issue that is now being turned into a political one”.