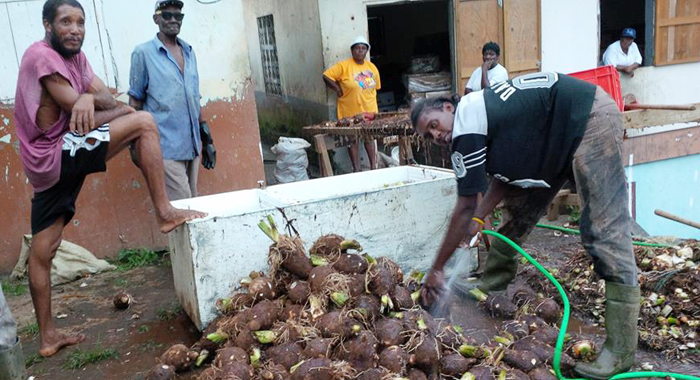 Minister of Agriculture Saboto Caesar says the government is moving to address the marketing of farm produce, even as he noted that there are still the challenges of non-repayment of loan by farmers, and the theft of produce and animals.

“We are going to take a paper to the Cabinet of this country to ensure that very soon we resolve the issue of marketing of agricultural produce in this country,” he told the Unity Labour Party’s (ULP) election anniversary celebration rally in Barrouallie on Saturday.

Caesar said that St. Vincent and the Grenadines has made much progress, including in agriculture, since the ULP was election on March 28, 2001.

He further said that the best credit system for Vincentian farmers ever was established under the ULP.

He noted that EC$6 million has been placed in a revolving fund with the Farmers Support Company to support the development of agriculture, and encouraged farmers to apply for loans.

Caesar also announced that 5,499 sacks of fertilizer will be distributed free to farmers, even as the government will sell at a subsidised price another EC$2 million in fertilizer it has bought.

Caesar said that fertilizer, which should sell for EC$120 per sack, will be sold for EC$99.

But the minister also said that

the agricultural sector has gone through many testing times, including Hurricane Tomas in 2010, and numerous floods and drought.

“This government, we are going to ensure that in our recovery efforts, in the aftermath of the December 24 natural disaster, that we do our best,” he said in reference to the through system that left million of dollars in damage to agriculture and forestry.

“We want all hands on deck comrades because we have to work harder, farm by farm, farmer by farmer, comrade by comrade, citizen by citizen, to take this very important sector forward,” Caesar told party supporters.

He noted that the Ministry of Agriculture has received EC$800,000 from the Food and Agriculture Organisation to rebuild the hatchery that was damaged in the December floods and to help farmers.

Caesar further said that the Ministry of Agriculture has a plan in place to ensure that every farmer recovers his or her losses.

One reply on “Cabinet to receive proposal on marketing agricultural produce”