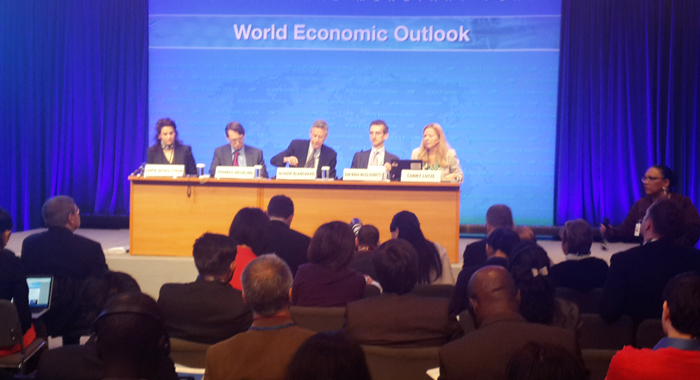 The World Economic Outlook was presented at the 2014 Spring meetings of the International Monetary Fund in Washington, DC on Tuesday. (Photo: Jerry S. George)

Washington, DC — The recovery of the world’s economy after the global financial crisis is “strengthening”, says Oliver Blanchard, IMF Economic Counsellor and Director of Research Department as he presented the World Economic Outlook when the 2014 Spring meetings of the International Monetary Fund officially kicked off on Tuesday.

Blanchard forecast that growth in the world economy would be 3.6 per cent this year and up to 3.9 per cent by next year. This he described as “a substantial improvement” compared to 2013 when the growth was 3.3 per cent.

The report didn’t mentioned the Caribbean specifically, but Sir Dwight Venner, Governor of the Eastern Caribbean Central Bank told this writer at the IMF Headquarters today that the report is done in regions and the Caribbean issues would be listed under the Latin American and Caribbean section.

The recovery is said to be “strongest in the United States, without much question” with a forecast of 2.8 per cent in 2014.

Stronger growth in advanced economies means that there would be increased demand for exports from emerging and developing economies, but there is a downside to that expectation.

The United States has said it would be normalizing its monetary policy in the coming months, which would lead to a tougher financial environment. Following the crisis of 2008, the U.S. resorted to what was called quantitative easing to ensure that there was money in the financial system to keep the world economy from stalling.

This is distinguished from the more usual policy of buying or selling short-term government bonds in order to keep interbank interest rates at a specified target value. This is done to increase the money supply by flooding financial institutions with capital in an effort to promote increased lending and liquidity.

Another area of importance pointed out in today’s World Economic Outlook is that foreign investors are becoming less forgiving. For a region which depends so heavily on foreign direct investment, this would mean much tighter scrutiny and borrowing becoming more costly.

Because potential growth in the advanced economies is very low, it means fiscal adjustments in those countries will be difficult and hence measures aimed at increasing potential growth are becoming more important.

These he pointed out may range from “rethinking the shape of labour market institutions to increasing competition and productivity to rethinking the size of the government in some countries, to re-examining the role of public investment”.

The report, however, noted that the world financial system remains in various dimensions at risk and that geopolitical risks have risen, “but for the moment they haven’t had global macroeconomic implications”.