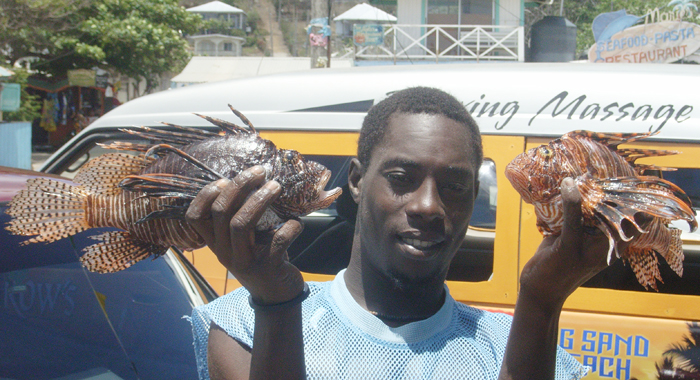 Lesroy Noel of the Tobago Cays Marine Park said that the catch significantly reduced the population of the invasive predator in local waters.

Team Green Diamond won the $500 cash prize for bringing in the most lionfish, team Kevisha got $300 for second place and team Grenadines Dive claimed $200 for the third place.

The $250 cash prize for the single largest lionfish went to team Kevisha, for a fish that was 15.5 inches and team Grenadines Dive earned the same for getting the smallest lionfish, 5.5 inches long.

After an early start with a safety briefing at 6 a.m. for the participating fishermen, the day continued with samples of lionfish in a beer, egg and coconut batter served with a chili and orange juice dip prepared by chef Digby Lewis from Anchorage Yacht Club and both jerk lionfish and grilled lionfish created by Clifton’s chef Teroy Wilson of Big City Restaurant.

For many passers-by, this was their first taste of lionfish and the response was very favourable.

“It was wonderful; the best I’ve ever tasted,” said Tisha McIntosh. Mayreau’s Desmond Lewis enthused, “I had a taste of pretty much all of them and it was just fantastic.”

Volunteers from the Mayreau Regatta and Sporting Committee handed out lionfish quick fact sheets to the crowd.

“What a great opportunity for public education,” said Nancy Saul-Demers.

“As folks watched the catches being counted, measured, weighed and prepared for cooking, they learned that lionfish begin making babies before they’re one year old and then a single female lionfish can make more than two million babies each year.”

Enthusiasm about the event wasn’t felt just in the Grenadines.

On St. Vincent, divers from both Serenity Dive and Indigo Dive remain interested and will continue to cull lionfish in the waters around their operations at Calliaqua and Buccament Bay, respectively.

“All in all, our First Annual Union Island Lionfish Derby was a great effort to control the voracious and venomous species in the waters around the Southern Grenadines,” said Ken Williams, manager of the Tobago Cays Marine Park.

“Not only did we get 155 of these invasive predators out of our waters, we also fed and educated lots of Union people and visitors alike.

“We’re already looking forward to the second annual event in 2015. But for now, there’s still the rest of Union Island’s Easterval 2014 to enjoy.”