After week of rest, Gonsalves gives assurance about his health 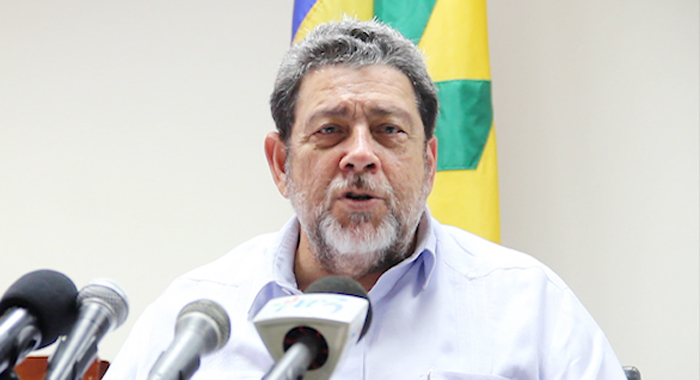 Prime Minister Ralph Gonsalves on Wednesday sought to assure Vincentians that he is in good health, having returned to work after doctors ordered him to rest for a week because of an ankle injury.

“From the standpoint of my health, I am fine. It is just that I had this unfortunate accident with my foot, my ankle, and I am OK,” the 67-year-old leader told a press conference.

“Knock wood that I would be around for a little while yet. There are many unfinished tasks…” he said, as he rattled his knuckles against the table in the Cabinet Room.

On Thursday, Communication Consultant in the Office of the Prime Minister Elson Crick said doctors had advised Gonsalves to rest his ankle, and as a result of this, the Prime Minister had been working out of his official residence since Tuesday.

When asked on Wednesday to give details about the injury, Gonsalves said he had slipped in his bathroom.

“First off all, let me just preface this by saying I am a human being and prone to accidents, like everybody else.

“I don’t know how many of you have come out of bathrooms, showers, where there is water on the floor and the tile isn’t as good as it should be and you kind of slip; you twist your ankle.

“And it was my unfortunate joinder of facts and circumstances, where I had a small cut at my foot bottom. I walk about the house barefooted like any countryman. There would have been also with the twist, a little hole in the foot, so they were conjoined. The foot got swollen, the ankle part,” Gonsalves.

He said he had taken antibiotics and anti-inflammatory mediation to threat the injuries.

“If I wasn’t Prime Minister, nobody would be concerned about if Ralph twist he ankle,” he further said.

Gonsalves also responded to persons whom he said don’t particularly like him, and always wish for the worst whenever he has “any slight incapacitation”.

“I hope and pray to Almighty God that the worst don’t happen to them,” he said, adding that when the physician checked his blood pressure it had a reading of 119 over 77.

“It doesn’t mean that it can’t go up a little bit more than that from time to time. My blood sugar level is fine. But, at the same time, I am a human being. I am going to be 68 years old in August,” Gonsalves said.

“I thank God for the years he has given me thus far and for the condition in which he has me. And if the bones creak from time to time, and particularly that same foot on which I had done my surgery in 2007, that’s it.”

Gonsalves has been Prime Minister of St. Vincent and the Grenadines since March 2001 and has indicated his intention to lead the Unity Labour Party into the next general elections, constitutionally due by the end of next year, when the party will seek a fourth consecutive term in office.

4 replies on “After week of rest, Gonsalves gives assurance about his health”