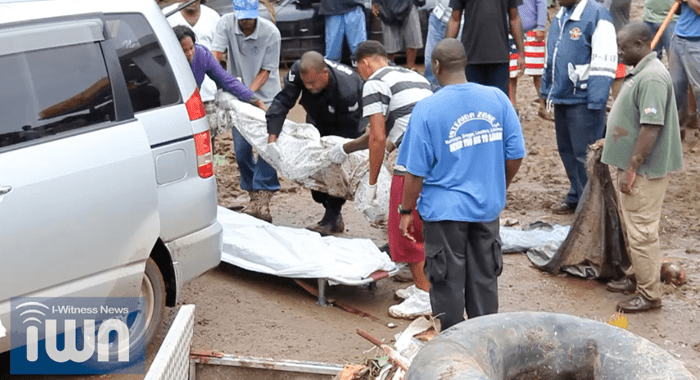 Nine persons died in floods and landslides in SVG last year. An expert says 95% of natural-disaster-related deaths have occurred in developing countries.

Since first coming to power, the Unity Labour Party (ULP) has been fully aware of the vulnerability by serious flooding at Buccament and in other places. They were aware that Buccament is generally a flood plain area.  Their studies from 2000 to 2014 show just that.

Advice from the World Bank on a regular basis since 2000 has been to carry out river defence work at Buccament. Over the years, the SVG government failed to do anything to any river until after flooding and tragedy struck. They never spent a red cent on Buccament River regardless of the numerous reports advising to do so.

The Emergency Recovery and Disaster Management Project has two physical components to be funded under the project: coastal protection works at Layou Beach, which has suffered considerable erosion over the past few years; and riverbank protection of the Colonarie River, the Langley Park River, and the Buccament River by building gabion structures along sections of the three rivers.

The riverbank protection improvements and sea defence are of themselves a mitigation exercise. Some issues to be addressed are common to all of the riverbank protection projects: a) Uncertainty over ownership of riverbanks and riverbeds can be resolved by seeking legal interpretation on the boundary of public and private land at riverbanks and riverbeds generally. b) Risks to public health and the environment from farming practices should be reduced by advising farmers to exercise better monitoring and surveillance of their chemical use, and by enforcing laws seeking to regulate the use and disposal of plastics. 3) Existing policy assuming the government to shoulder the cost of riverbank and property protection should be reviewed. Criteria should be established as the basis for future government involvement in riverbank protection projects.

Gabion structures could be made more endurable by utilizing PVC coated wire baskets for the areas close to the sea and subject to corrosion “.

This report was addressed to and submitted to the Unity Labour Party Government. They were made fully aware of the above. But what makes it worse is that when this type of report is written, it is composed by information directly gathered from the government. So such a report only confirms what the government already knows.

A Government report named the “Disaster Vulnerability Reduction Project (DVRP) Environmental Assessment Report E2703” and dated December 2010, tells the same story, a failure to carry most if not all of the recommendations.  An extract of the report follows:

As described, the project has a number of activities scattered throughout St. Vincent and the Grenadines (Bequia). Most of the sites are located in communities in the following areas:

Buccament and Carriere River Defence Sub-projects Background. The lower sections of the Buccament and Carriere rivers pose potential threats to significant property and road infrastructure. In recent years, the Buccament valley has witnessed the development of a significant number of residential houses and a major hotel development. As a result, clearing and other poor land use practices in the development process have led to flooding of the river in its lower sections — requiring an intervention….

The current project seeks to implement the most critical flood mitigation measures proposed by the hydraulic studies”.

This would include river defence measures that include a combination of reinforced concrete works, gabion baskets, realignment, levees, tributary drainage improvements, vegetation, and any other proven complementary efforts to improve past designs.

… Buccament is located on the south leeward side of the island and sustains the largest and most reliable source of potable water on the island, the Dalaway catchment, which provides over 40 per cent of the island’s total water supply. Apart from this, the river supports community activities such as sport fishing, bathing, and water for farms and stones for building construction. From documentation, it was revealed that the riverbanks are relatively shallow at 8ft to 15ft. (2001). Additionally, the river has a profound impact on the structure and life of the communities. It empties into a flood plain of relatively poor drained soils near Buccament Bay that runs along the main road Activity: The installation of gabion walls comprising staggered stocks of gabions baskets varying in height between 12ft and 15ft. The walls will be 50ft in length on both banks downstream of the main bridge and 1000 ft along the right bank upstream of the bridge and 500 ft along the left bank.

What can we conclude from the 14-year-old failure for the  “riverbank protection of the Colonarie River, the Langley Park River, and the Buccament River by building gabion structures along sections of the three rivers“?

That the government is 100 per cent guilty of neglect of duty? Is it a fact that the government has failed the people, failed to give the people the best that was available?   Is it a fact that if the river defence structures were in place by December 2013, that lives would have been saved and millions of dollars of structural and flood damage to public and private property would not have occurred?

I have wondered for a long time why there are hundreds rock baskets for building gabion structures, folded as flat packs, laying in the government small works yard at Arnos Vale.  They have been there since 2006 and are still there today.

Did this ULP government fail to act on the advice and recommendations by the World Bank to carry out the work mentioned by the World Bank in the Project P069923 Vincent and the Grenadines — Emergency Recovery and Disaster Management Program Project?

Seeing as the government knew about the need to carry out river flood protection, why did they give Buccament Bay resort permission to build in a known flood plain on a river that required river bank flood defences installing?

Why did they approve of building private houses in a flood plain, next to a dangerous river requiring bank and river base restructuring and defences? Why? Why? Can they tell us Why?

Why did they fail to install those defences?

It’s my honest opinion and belief that the Prime Minister must take full blame for what happened at Buccament, including the loss of life. It was all very well walking among the people stricken by the flood, people who lost family members, whole families dead and gone. Walking with tears in his eyes and talking about  the tragedy as if it was an act of God. It was not an act of God; it was the non-action and failure of his government that was the root cause.

Remember he once told us that he was in charge of every square inch in St. Vincent and the Grenadines.  So as a recipient of accolades by some of his supporters he must also be the recipient of blame. And as he is in charge and control of every inch, then he must accept full responsibility for the death and destruction at Buccament and destruction and mayhem elsewhere in the country. Because had he spent more time correcting the things that save lives and less time on pumping all the countries money into the Argyle airport, I believe the people and children lost at Buccament would still be with us.

As for Senator and Cousin Francis, walking among the people with a loud hailer shouting out names of people who were to collect relief items, etc, carrying a red ULP umbrella in top gear electioneering mode, he is the Minister of Transport, Works, Urban Development and Local Government, almost every time I have been to Buccament Bay Resort over the last four years I see him there.

He once told us if you have any trouble at Buccament, “come and see me”. So as self appointed Mr Buccament Fixit.  I also hold him responsible for the same as Cousin Ralph.

Why did he not take it upon himself as minister and Mr Fixit, to fix the river security for the people? Am I correct? Do such works come under his ministry?

I advise every reader to go to each of the reports and read them carefully. You will see all the other things that this government has failed you on.

WAS IT MURDER BY GOVERNMENTAL NEGLECT?  WELL WAS IT?

7 replies on “Were Buccament flood deaths murder by governmental neglect?”