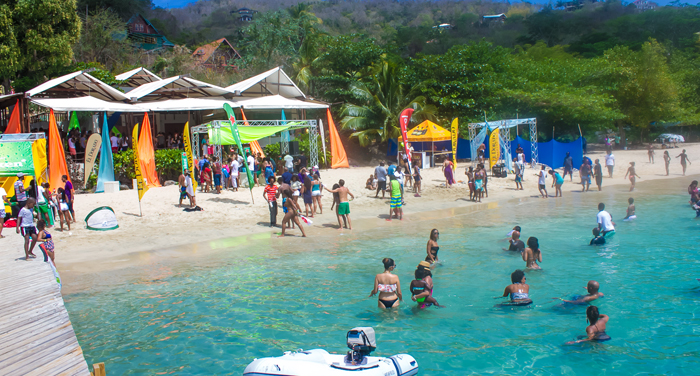 Hundreds of persons went to Bequia for the Easter weekend, not knowing there were suspected case of chikungunya there.

Public health officials have defended their decision not to warn Vincentians that there were suspected cases of the chikungunya virus on Bequia even as hundred of persons visited the island for Easter celebrations.

The mosquito-borne virus was first suspected on Bequia on April 12, and three cases were confirmed last Wednesday, April 23.

The Ministry of Health said today — Monday — that it is still awaiting test results from a further 14 suspected cases, also on Bequia.

Hundred of persons travelled to Bequia for the annual Easter celebration there, but the Ministry of Health did not warn that there were suspected cases of the virus there when on April 17 — Holy Thursday — it said in a release that the disease had not been confirmed in St. Vincent and The Grenadines.

The Ministry said in a separate release that it would conduct fogging in Bequia on Holy Thursday and Good Friday — April 17 and 18.

“Maybe we could warn, then you might be warning to cause alarm,” Chief Medical Officer Dr. Simone Keizer-Beache said at a press conference on Thursday when asked why no warning was given.

“We responded by going to the area and increasing our fogging activities. We tried to decrease the mosquito load at that point. They are suspect cases, so we went through the procedure we agreed on — the recommended procedure — in terms of how we respond to chikungunya suspect cases,” she said, adding that samples were sent off to Trinidad where testing for the virus is done.

She further said that the samples were sent on Holy Thursday and the results, confirming the cases, were received last Wednesday.

Meanwhile, Dr. Rosmond Adams, chair of the National Surveillance Committee within the Ministry of Health, speaking at the same press conference — where the confirmed cases where announced and the response outlined — noted that chikungunya and dengue share the same symptoms and are spread by the same vector: aedes agypti mosquito.

Adams said that since the cases were not confirmed, the Ministry of Health did not want to “issue any release saying that we have chikungunya and create alarm”.

He, However, said that the Ministry of Health issued a press release calling on Vincentians and other persons to protect against being bitten by mosquitos, and outlined the signs and symptoms of dengue and ask if persons present with these signs and symptoms to check with their healthcare provider.

“We did alert the public that chikungunya was present in our medium. There were also reports on social media and other areas that said we had confirmed cases. We said we did not have any confirmed cases, but we said what could be done in order to prevent being bitten by the mosquito. So, we did alert people to take protective measures,” Adams said.

Meanwhile, Danville Toney, senior environmental health officer within the Department of Primary Health Care and the Environment, noted at the press conference that control of chikungunya is linked to the control of the aedes aegypti mosquito.

He said that on receiving the information that there were suspected cases of the virus in Bequia, a field officer was dispatched to the island and later that same day (April 12), the supervisor of the Vector Control Unit, Todd Lewis, along with some other insect vector officers travelled to Bequia to give support.

Toney said that the trip was to conduct inspection in the areas where the suspected cases were identified and to conduct fogging operation.

“We didn’t want to take a chance, we wanted to knock down any infective mosquitoes or mosquitoes that might have been infective,” he told the press conference.

“We felt that we had to initiate the fogging again, especially because we had a lot of our citizens from the mainland were congregating in Bequia for the Easter season. We wanted to contain the spread of the disease, if in fact it was that. Eventually, it turned out that we had three confirmed cases,” Toney said.