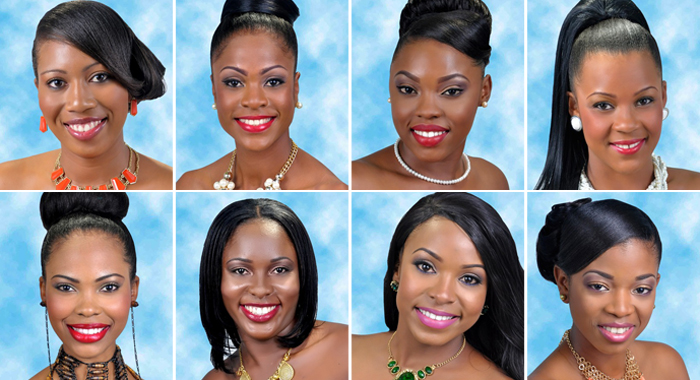 The Miss SVG 2014 pageant takes place at Victoria Park on May 31. Following are the contestants’ photos and biographies.

Fellisia was born on March 28, 1994 to Monica Baptiste and Lloyd Morgan.

She discovered her love for the performing arts during her primary school years.

Fellisia is a final year student at the St Vincent and the Grenadines Community College (SVGCC): Division of Technical and Vocational Education, pursuing an Applied Associate Degree in business studies with a concentration in sales and marketing.

At the SVGCC, Baptiste served as choreographer of the Latin dance club, President of the DTVE Debate Club, Public Relations Officer of the Community Service Club, and an active member of the choir.

She sees Miss SVG as an opportunity to form lifelong friendships, experience a new world of possibilities, and be an ambassador for her country.

Today’s disappointment is tomorrow’s opportunity.” This is one of the motivational quotes that have moulded Selis into the positive young lady she is today.

Selis, who hails from Richland Park, was born on March 26, 1990 to Vincentian parents Glenis and Selma Blair in Grenada.

Selis attended the Bishop’s College Secondary School in Carriacou and pursued post-secondary education in St Vincent at the Caribbean Technical Academy, and was awarded a Diploma in Business Studies.

Selis enjoys modelling, and joined the Mije Modelling Agency in 2007. She has participated in numerous fashion shows and promotional events, including SVG’s Next Top Model in 2013.

Selis aspires to pursue a career in business administration and model instruction.

Shackell Bobb was born in Kingstown on March 25, 1993 to Diane Bobb and Kendal Warren.

She resides in Richland Park, and is a graduate of St. Vincent Girls’ High School.

She also pursued studies in law, psychology, Caribbean studies and communication studies at the St Vincent and the Grenadines Community College: Division of Arts, Sciences and General Studies.

She is a netball fanatic and has been a member of the Clincher’s Sports Club for the past seven years, during which she earned multiple MVP awards.

She aims to help reduce the prevalent issue of domestic violence, specifically abuse against women, and aspires to pursue studies in law.

Shackell also hope to form a sports club to engage young persons in constructive activities. The Miss SVG pageant is therefore an avenue for Shackell to be a role model for young girls in her community.

Karla Gellizeau was born on Sept. 1, 1993, and resides at Edinboro with her family.

She is a graduate of the Girls’ High School. And pursued studies in literatures in English, communication studies, and psychology at the St Vincent and the Grenadines Community College: Division of Arts, Sciences and General Studies.

She is employed as a teacher aide at the Edinboro Early Childhood Centre.

Karla considers herself to be a fun person, who enjoys reading, dancing and acting.

She is also a member of the Urban Expressions Theatre Company.

Karla was Miss West St George 2012 crown, and has also represented St. Vincent and the Grenadines at the Miss Caribbean Culture pageant in Nevis.

Karla has a keen interest in children and their educational development, and aspires to pursue a career in early childhood education.

She is a graduate of the Girls High School, and also studied law history, literatures in English, Caribbean studies and communication studies at the St Vincent and the Grenadines Community College: Division of Arts, Sciences and General Studies

Shadeisha is an avid reader and draws much of her inspiration from writers who convey real experiences by presenting true accounts of their challenges, and reveal how they overcame them.

She believes that one is not necessarily born with courage, but rather, one is born with potential.

Shadeisha is involved in the Girl Guides Movement and takes part in many of their activities. She also likes dancing and socialising with friends.

She is an employed at Bank of St. Vincent and the Grenadines, and hopes to pursue studies in International Relations at the University of the West Indies.

Shadeisha describes herself as a selfless, driven, committed individual.

Vanika was born on March 14, 1992. She lives in Chateaubelair, but grew up in Belair.

She is interested in drama, music, reading and socialising with new persons.

Vanika has always aspired to enter the Miss SVG pageant, and describes herself as a confident, hardworking, intelligent and independent individual. She worships at Chateaubelair Methodist Church, where she also serves as the church’s secretary.

She was raised and resides on the Grenadine island of Bequia.

She attended St Joseph’s Convent Kingstown, where she developed their interest in pageantry.

She participated in the school’s pageant in 2005 and placed First Runner-up.

She is employed as a guest service representative at the Bequia Beach Hotel.

Tatiana has a passion for poetry, music, art and fashion and was motivated to enter the Miss SVG pageant because it gives her the opportunity to meet new people and for her personal development.

For her, this is also a great way to showcase her talent and intellect to the nation.

Jamilla was born on April 13, 1990 to Gracie Neverson and Rimmond Fraser.

She lives in Vermont.

She graduated from Professional Secretarial and Consultancy Services Inc. in 2010.

Jamilla describes herself as a determined, focused individual who is prepared to work hard to accomplish her goals.

She is employed at the Buccament Bay Resort as a front office agent. Jamilla enjoys singing, reading, spending quality time with loved ones, visiting places of interest and helping others.

Jamilla is interested in pursuing studies in business management or hospitality.

She is always prepared to help the less fortunate. As a result, she plans to use the exposure gained from the Miss SVG pageant to work along with charitable organisations in SVG to highlight some of the needs in our society.

Jamilla’s favourite quote is “The past is behind, learn from it. The future is ahead, prepare for it. The present is here, live it.” —  Thomas S. Monson.