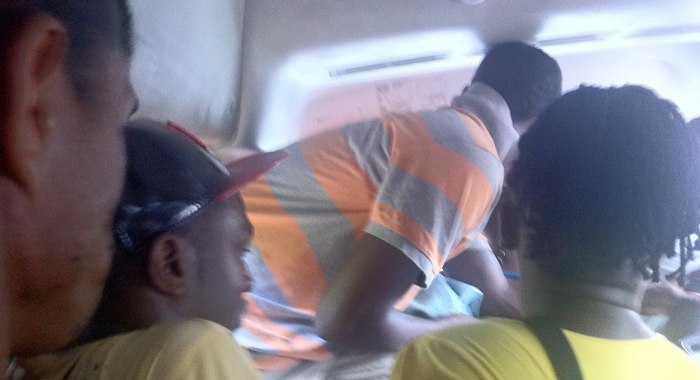 President of the Omnibus Association Anthony Code Red Bacchus says it is not illegal for conductors to stand in buses, as seen in this van travelling to the Leeward side of St. Vincent. (IWN photo)

Members of the National Omnibus Association (NOBA) will soon fly yellow flag from their vehicles as a warning to the government to consider their proposals.

If the government fails to act, the group will move to the next stage — red flags, President of NOBA Anthony “Code Red” Bacchus told I-Witness News on Tuesday.

Bacchus has accused the Traffic Department of the Police Force of rejecting all of the proposals that NOBA made at a meeting between both parties on April 16.

The NOBA has proposed an express route out of Kingstown via Cane Garden from 4 p.m. to 6 p.m. but the police rejected this, saying there were existing alternatives, namely McKies Hill, Level Gardens and Roseau.

The NOBA is also asking for bus stops (from city) near CIBC First Caribbean Bank on Halifax Street Kingstown, and near the Milton Cato Memorial Hospital, respectively.

Bacchus noted that the first bus stops after leaving the bus terminals in Kingstown are at Peace Memorial hall and the Nurses Hostel on the Windward and Leeward sides, respectively.

In an interview with a radio station last week, Anthony called for unity among bus drivers and owners and complained about “unnecessary harassment” by police when issuing tickets to drivers.

NOBA and the police are also at odds over what constitutes loud music, since it is not clearly defined in the current legislation.

Bacchus also told I-Witness News that the practice of conductors standing or leaning over passengers when minibuses are full is not illegal.

“The van is licensed to carry 18 passengers. The conductor — who must have a licence to work — is not a passenger. He is a worker, like the driver,” Bacchus told I-Witness News.

Minister of Transport and Works Sen. Julian Francis told reporters last week that that he is not opposed to a bus stop near the hospital, but added that it should not be at the main entrance/exit.

“The buses will stop there not just for sick people,” he said.

“I am saying if a bus shed is to be considered, put it around by Daddy’s Shop, not in front of the main entrance to the hospital. So that if there is a sick patient, the sick patient can exit at Daddy’s Shop rather than at the front where the clinic is.

“It is too dangerous and inconvenient to the sick people to have the health people standing up and blocking up the hospital gate every afternoon,” Francis said.

12 replies on “Minibus association to fly yellow flag in protest”