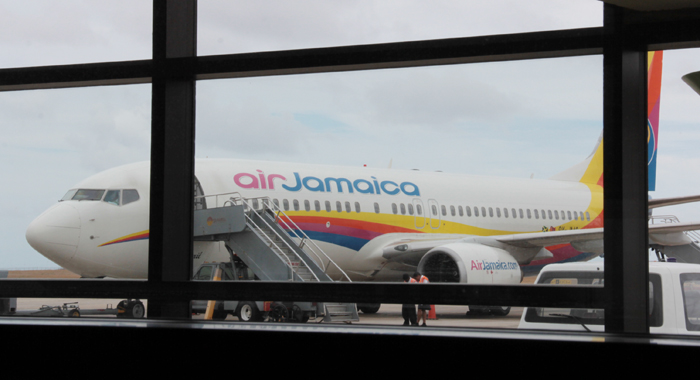 An elderly female passenger died on board this Air Jamaica aircraft as it flew from Trinidad to Barbados on Saturday. (IWN Photo)

BRIDGETOWN, Barbados — An elderly female passenger died during Caribbean Airlines flight BW456 from Port of Spain to Bridgetown between 8 a.m. and 9 a.m. Saturday, a passenger on the flight has told I-Witness News.

The passenger said that the woman complained of chest pains and flight attendants made an announcement for any medical professional on board to identify themselves.

A doctor was on board and attended to the lady, and later commented, “She is gone,” meaning that the woman had died, the passenger said.

The passenger told I-Witness News that the woman lives in Trinidad and was going to St. Martin to visit her daughter for Mother’s Day, which will be celebrated tomorrow, Sunday.

“She was fine, happy, excited to go and see her daughter. We talked and laughed a lot,” the passenger told I-Witness News.

When the flight landed in Barbados, the rest of the passengers disembarked, then officials from Barbados boarded the aircraft, the passenger further said.

Correction: An earlier version of this story said the passenger died on an “Air Jamaica flight”. However, while the aircraft on which the woman died has “Air Jamaica” markings, it was in fact a “Caribbean Airlines” flight.