Leacock says ‘the gloves are off’, accuses gov’t of ‘deep-seated corruption’ 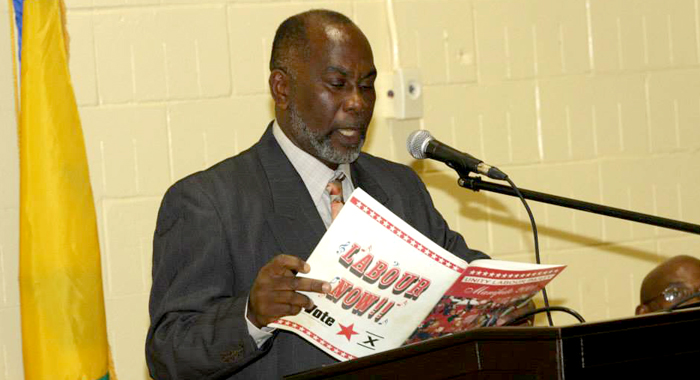 NDP Vice-President, St. Clair Leacock, has accused the ULP administration of not keeping its manifesto promises. He is seen here in May 2014. (Photo: NDP/Facebook)

Opposition lawmaker St. Clair Leacock read from a Director General of Audit report as he told Vincentians in New York Saturday night that there is “deep-seated” corruption within the Unity Labour Party government in St. Vincent and the Grenadines (SVG).

The Central Kingstown representative, who is also a vice president of the New Democratic Party (NDP), said he was borrowing Prime Minister Ralph Gonsalves’ expression, “the gloves are off”, and outlined what he said was the failure of the ULP to keep many of its 2001 manifesto promises.

Speaking at an NDP organised town hall meeting in Brooklyn, Leacock quoted the manifesto and the 2010 Audit report and spoke of breeches of government procedures at the SVG consulate in New York.

“… I find it a remarkable document as a point of departure for the quagmire, the mess, the despair, the hopelessness that we are in St. Vincent and the Grenadines at this time,” Leacock said of the manifesto.

He noted that the ULP had promised to wage a war on corruption in government, but said, “Satan can’t correct sin.

“They have to be the architects of corruption,” Leacock said, adding that the ULP’s promise to introduce integrity legislation was the “first lie”.

He noted that former national security minister under the ULP, Sir Vincent Beache, had told Vincentians “don’t look for me” if the ULP did not introduce integrity legislation within 100 days of taking office.

“And as faith would have it, it turned out to be the NDP, with two efforts, to bring that piece of legislation to the Parliament and failed to have the support of the governing regime to bring integrity legislation to St. Vincent and the Grenadines,” Leacock said.

“What a shame…” Leacock further said as be likened the government to “back-back turkey” — the Vincentian term for the larval form of antlions.

He further said that the ULP had promised to strengthen the criminal laws against corruption.

Leacock quoted the audit report as saying that “the financial statements presented for audit did not, in all material respects, fairly represent the financial position of the government of St, Vincent and the Grenadines as at 31st December 2009 and 31st December 2010.’

“In other words, they got a qualified audit report,” Leacock said, adding that in the private sector, the CEO would be fired in such a situation.

He further said that he ULP, which came to office in March 2001, had said it would stop the widespread racketeering and thievery at several government departments.

But Leacock added that the audit reports highlighted “deep seated sets of conflicts of interest which have allowed government officers to rob … government ministries and those officers have been promoted from the ground floor to the upper floor.

“And a prime minister sits there and does nothing about it,” he said, adding that he would not call names, “out of the sensitivity for the persons involved”.

The ULP had said that under the NDP administrations, there was a lack of financial accountability in SVG’s overseas missions. “Well mouth open and story jump out. … With respect to ending corruption, this is the crowning jewel for the ULP administration,” Leacock said, referring to a Sept. 9 to 21, 2013 Director of audit report on the SVG Consulate in New York.

The report said the records presented by the consulate “were extremely disorganised, and devoid of important supporting documentation, hence the scope of the audit was limited and as such, significant errors and irregularities may not have been detected”.

Among the significant findings of the audit, Leacock said, quarterly allotment remitted to the consulate officer were not transmitted on a timely basis, there was no monthly expenditure summary to reflect the expenditure incurred for the period under review, and no bank reconciliation statement prepared for the operating of passport accounts for the period under review.

Other significant findings were frequent withdrawal of sums of $200 for petty cash, without any supporting invoices, an outstanding balance of $16,964 on the American Express card as of July 1, 2013, receipt books otherwise than those prescribed by the financial regulation were used by the consulate general office for a significant length of time during the period under review, and the consulate offices continued to collect passport fees without the requisite authority.

“This is the auditor general speaking about a government who speaks about transparency and accusing people, and administrations past,” Leacock said.

“You know, it’s painful to go through this,” Leacock said, adding that the report said that payments made on behalf of senior government officials were not reimbursed to the consulate office, expenditure of $61,000, which was incurred for the purchasing of furniture for the consular general apartment was not cleared from the advance account…”

“… the consul general has indicated that US$2400 that was paid on his behalf by the consulate in 2011 to secure living quarters is still outstanding and will be paid early in the new year,” he further said, quoting the report.

“And I can go on and on. A litany of woes in a consulate office by a government, and people are on Facebook pointing fingers at others in St. Vincent and the Grenadines,” Leacock said.

5 replies on “Leacock says ‘the gloves are off’, accuses gov’t of ‘deep-seated corruption’”