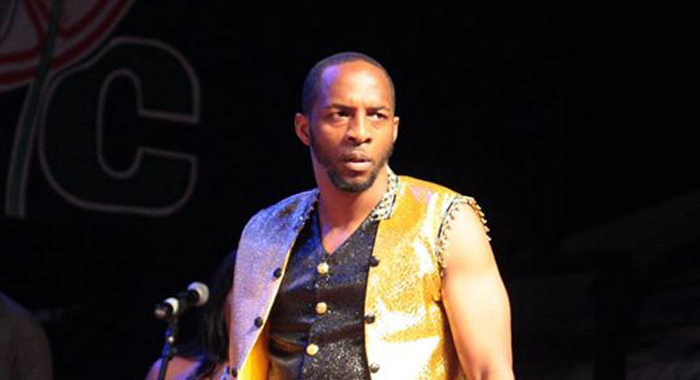 Skarpyon as he performed in the Ragga Soca competition last year. (IWN photo)

Sitting across the table at a restaurant in Kingstown, Vincentian soca, calypso and ragga soca artiste Shernelle “Skarpyon” Williams is very pensive as he speaks about his career as an entertainer and what fans can expect for Vincy Mas 2014.

His fans, he tells I-Witness News in a recent interview, know what to expect from him. “It is just for me to present it to them, because they are already waiting and they have seen my consistency over the years.

“Consistency, yes; but they are also seeing my creativity. And it has been impacting well,” the reigning calypso monarch adds.

Skarpyon speaks of his music with a sort of subdued passion, which nevertheless captures the pride he feels about his compositions.

His music, he boasts, cuts  across age groups and persuasions. “From the toddler right up to the persons going to church.”

And the artiste’s music received further national recognition on May 9, when he received the St. Vincent and the Grenadines Association of Music Professionals (SVG AMP) awards for Calypso and Ragga Soca singles of the Year 2013, respectively.

“When you have the whole nation listening out to you, it puts you in a very challenging position, because you know you have all these ears,” he told I-Witness News in an interview ahead of, but unrelated to the AMP Awards.

“Are you just singing for entertainment?” Skarpyon asks rhetorically, as he pauses and contemplates, seemingly searching within himself for an answer to his own question.

Entertainment, he continues, is not just about having people dancing to an artiste’s music.

“Is there any depth to what you are singing that can impact people’s lives? Can you perform in church? Can any of your songs be used for something impacting as it relates to life, people dying, the environment?”

‘Into a very dark place’

One of the songs that Skarpyon will sing as he defends his calypso monarch title this year, came out of “a very dark place” the artiste went into after initial failure to make it to the finals of the competition last year.

Skarpyon’s calypso, “Until”, won a place in the semi-finals of the National Calypso Monarch competition last year, but judges at that stage of the competition did not include him among the finalists, a decision which many calypso lovers, and the artiste himself, thought was a mistake.

Read also: Skarpyon says his omission from kaiso finals ‘had to be a mistake’

However, in an ironic twist, one of the finalists dropped out of the competition, and Skarpyon was back in, and went on to win the crown and a car, singing “Until” and “Song of Hope”.

Skarpyon says that “Until”, the song which also won him the AMP Award, was very special to him.

“When I finished writing the song, it really impacted my life to know that this came from the depth of the consciousness of a man,” he tells I-Witness News of the composition that says human beings must prepare for the worst until we adopt a more positive attitude towards each other and the environment.

“And looking at what I had written, I asked myself, ‘How could you (the judges) not choose this song?’

“I said, ‘This could have been a speech anywhere in the world, because it speaks about everything that we are fighting about. We want to live good, we need to cut out the political divisions, we need to fix our environment, we need to improve our family.’

“So I went into a very dark place and from that came my calypso for this year.”

But that was as much as the artiste was prepared to reveal about the song, adding only, “I made a twist to it, which relates to us as a race. We are living creatures and if we could erase race, we will see mankind.”

He was also evasive when asked about when the song will be released, saying, “It is about impact and whether I feel satisfied with it.”

Skarpyon tells I-Witness News his second calypso is complete, and all that remains is for him to become the character in the song.

“This is where artistes tend to fail. They don’t become the character. They just go on stage and they come off the stage the same way. That is where my strengths are in my music and my performances, because I become that character.

Skarpyon is considering competing in the Ragga Soca competition this year, a genre he said he has stuck with when it was not popular among artistes and DJs.

“When persons were not singing raga soca, I was the one who stuck with it. I never gave up on it, and I keep creating every year,” he says.

Skarpyon recounts to I-Witness News an experience he had with a DJ at a radio station, who, when presented with a copy of one of the artiste’s ragga soca tracks, asked, “Where you going with these soft music? You have to sing hype up songs.”

“And I realized he was just playing music for himself. What about the listeners?”

But not to long after, when Skarpyon released “Lookin’ Fine”, that same DJ was requesting a copy of the song. “He probably didn’t even remember what he told me. So, right there and then, I know there are some persons who may be involved in the music industry somewhere or the other and they don’t really understand.

“And that is something that can really stop the progress of our artiste if they themselves don’t understand how some people think,” Skarpyon says.

If artistes are not focused, they can become very reactionary to what people say and lose their own style.

“What would happen, you will become a fashion designer in music. … You will notice that the music that many of these artistes are producing is just for a short time, and nothing impacting.

“I am not an artiste who writes trend music. I write creative music, I write artistic music –music that has the formula of what I should be.”

But when asked whether it is the artiste or the musician who decides what should be produced, Skarpyon tells I-Witness News that they each have a role to play.

“But the musician has the final say, because whatever the musician creates, they have to play,” he says, adding that something is wrong when a musician feels that he or she has to produce many songs in order “to be current”.

“I follow the pattern off of the original creators of music,” Skarpyon says, mentioning among them Bob Marley, Robert Frost, Winston Soso, and Lionel Richie.

“You have so many R&B artistes who come and go and we can’t even remember one song from them. But the ones who came before us, we still listen to their songs — the music from the 70s. What these guys were doing was sitting down and creating and setting the trend. They weren’t thinking ‘I want this song to have one million downloads.’ They were creating songs that impact people’s lives.”

Skarpyon further opines that some contemporary songs are “musically incorrect”.

“Sometimes, there is a song and you can’t even dance to it,” he says, adding that on the other hand, when there is a hit song, many artistes rush to copy it.  But Skarpyon says he understands “the science” of music and does not gravitate to “trend music”.

It was not difficult for Skarpyon to stick with ragga soca over its more up-tempo cousin, power soca.

“On the road, people can jump up so long to a fast song. Then it always goes back to groovy music.”

But it is not that the artiste is avoiding power soca. “I never run away from it. I just have a different way of doing it. I have songs penned. I may do some up-tempo songs”

But will he compete in this year’s Soca Monarch competition?

“I don’t have to. But the fans sometimes ask for it. But, at the same time, if I don’t do it, it is not a problem, because there are persons in the music industry who do that,” he tells I-Witness News.