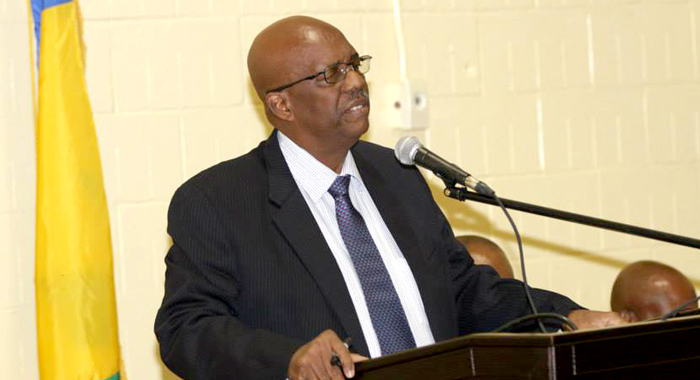 Leader of the Opposition Eustace has pledged that a New Democratic Party (NDP) government will lobby Ottawa to reinstate visa-free travel to Canada for Vincentians.

In September 2012, Canada announced that it was revoking the visa waiver for Vincentians, citing immigration violations, and unreliable travel document.

The Ralph Gonsalves government has strongly rejected Ottawa’s questioning of the Vincentian passport, saying that immigration officials there had bundled St. Vincent and the Grenadines with other countries for which visa waivers were withdrawn at that time.

The government, however, noted that it had warned Vincentians against making fraudulent asylum claims in Canada.

The Gonsalves government has since said that it would not be easy to get Ottawa to reverse its decision.

But Eustace told a town hall meeting in Brooklyn, New York on Saturday that if elected to office, the NDP will keep the visa issue on the front burner.

“My fear in leaving it alone is which country would do it next. That’s my fear. Will the United Kingdom turn around and do the same thing to those Vincentians living in that part of the world?” Eustace said.

“We believe it is possible still, over the next few years, to discuss with the government of Canada ways which would lead us to having those restrictions removed. But it cannot be done overnight; but it must not be left alone,” said Eustace, an economist who was trained in Canada.

He said if Kingstown is not seen to be acting to improve the situation with Canada, it is likely that other countries will impose visa restrictions.

“But we must be able to go to Canada, so I am waiting for the Prime Minister to go to Canada,” he said to applause, seemingly giving credence to the suggestion that Gonsalves, who has not visited Canada for some years, could face embarrassment because of a sexual allegation against him by a Vincentian-Canadian.

Eustace quoted statistics from an “impeccable source”, indicating that between 2009 and 2011, 3,308 (30.6 per cent) of Vincentians who run afoul of Canadian statutes, committed immigration violations.

“That is a large amount compared with countries that are much bigger than SVG,” Eustace said as he noted Canada’s right to protect its borders.

Included among those 3,308 violations, were 216 violations for criminality, including two for organised criminality, Eustace said, adding, “People are desperate, they leave home because they want to improve themselves, but there are consequences.”

He further said 32.3 per cent of the Vincentians seeking asylum in Canada in 2010 were accepted.

“So, while the vast majority of Vincentians abided by the law in that period of time, we had those violations,” Eustace said.

“These statistics I find very challenging, but I don’t think they are hopeless. The criminality figures there are only 7 per cent of the violations,” he said, adding that members of the audience can point to themselves as examples that the bulk of Vincentians abide by the law of their adopted home countries.

He, however, noted the limitation of what the NDP can do to address the visa issue with Ottawa.

“We are an opposition party, not a government. But we are preparing ourselves for government and we know that we will have to do it. And I promise you, we will leave no stone unturned to deal with this issue, not only in relation to Canada, but that those outside can see that we are serious about these matters to avoid having a Canadian-type situation anywhere else,” Eustace said.

General elections in St. Vincent and the Grenadines are constitutionally due in December 2015.

2 replies on “Eustace vows to lobby Canada for visa waiver”