SVG’s biodiversity to be showcased in Kingstown 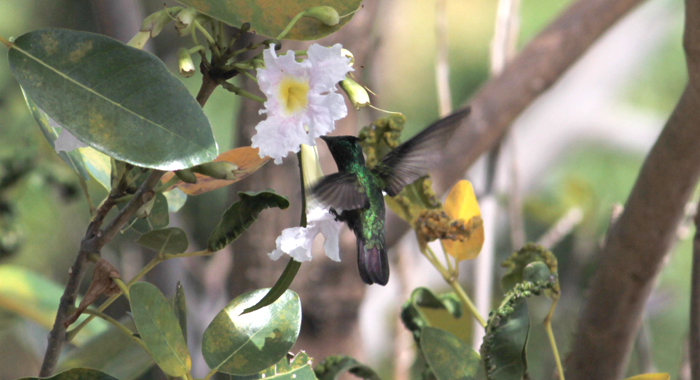 In this May 7, 2014 photo, a hummingbird drinks nectar from a tree in Rillan Hill. Islands are home to a vast range of animals and plants. (IWN photo)

International Day of Biological Diversity — May 22 — will be observed in St. Vincent and the Grenadines (SVG) with an exhibition under the personified theme “I am Biodiversity”, at the Old Public Library in Kingstown, from 10 a.m. to 4 p.m.

The public is being invited to visit and demonstrate their support and enthusiasm towards the nations biodiversity and its importance to SVG.

de Shong  noted that islands are home to some 600 million people, one-tenth of the world’s population.

Many islanders are endowed with unique cultures and derive much of their economic, environmental and cultural well-being directly or indirectly from the rich natural resources in their immediate environment.

Islands harbour numerous discrete ecosystems, from mountain forests to wetlands and beyond, that provide food, fresh water, wood, fibre, medicines, fuel, tools and other important raw materials, in addition to aesthetic, spiritual, educational and recreational values, all of which support island livelihoods, economies and cultures.

Island ecosystems also contribute to the maintenance of ecosystem functions. They provide defence against natural disasters, support nutrient cycling, and soil and sand formation, and they contribute to the regulation of climate and diseases.

“The unique characteristics that make island biodiversity so special also leave it particularly fragile and vulnerable. Despite the high levels of biodiversity and the prevalence of endemism, island species are present in relatively small numbers, making them very vulnerable to extinction,” de Shong said.

He noted that SVG is a multi-island nation, consisting of 32 islands and cays.

“It is home to a vast range of animals and plants, in which some are endemic and of great value to all Vincentians. Each ecosystem plays a vital role to the economy, environment, culture and aesthetics.

“However, with all the imposing factors such as climate change, natural disasters, land degradation, deforestation, pollution, unsustainable hunting and fishing, etc., the country’s unique biodiversity is posed with numerous threats,” de Shong said.