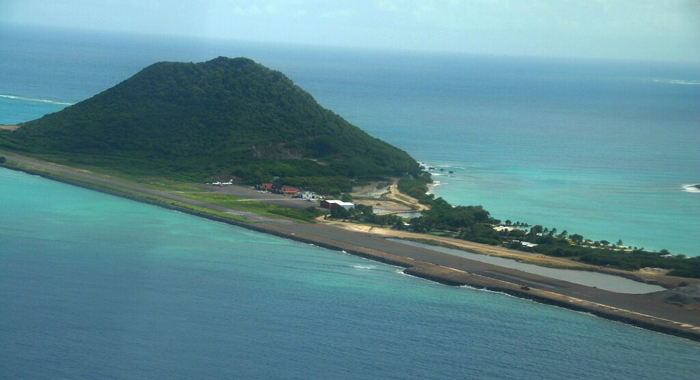 The reconciliation will see the government collecting outstanding monies and work recommence on the southern Grenadine island. (Internet photo)

Work on the development project in Canouan is expected to continue soon, with Prime Minister Ralph Gonsalves having helped to resolve “operational differences” between the two major investors.

The rapprochement will also see the government receiving some US$8 million owed by the investors, and could see hundreds of persons returning to work Gonsalves said at a press conference this week after returning from a two-week trip to Europe, where he met with the investors.

Gonsalves, who is also Minister of Finance, noted that the fall-out has negatively affected the economy, including employment and cash flow for the construction of the Argyle International Airport.

He explained that under the Canouan Lease Ratification Act, two years ago, there was a partnership between the Saladino Group and Irish billionaire Dermot Desmond, the major shareholder in the Sandy Lane resort development in Barbados.

As part of the new direction of the development in Canouan, “a hotel of a quality that you don’t see in the Caribbean” – “Pink Sands” — was to be built.

Gonsalves, who is Minister of Grenadines Affairs, further said that while the government is not   privy to the precise details of the agreement between both parties, it was informed of it.

He further noted that the law says that whatever development investors may have on Canouan, they must have operating “a hotel of international quality.

“The hotel has been built, but it is not yet operational,” he said.

Gonsalves said the government had reclaimed lands south of the airport, and entered a joint venture to develop the areas as an international quality marina and real estate with apartments.

However, when Desmond came into the picture, the development was enlarged to include a boutique hotel.

“The matters were going quite well. Sometime in September or October or thereabout last year, some operational differences arose between the two major partners and caused a winding down of the operations at the marina, which is partly completed, and also on the opening of the hotel in the developed areas,” he said.

Gonsalves said the difference affected the nation adversely, since many of the 1,000 or so persons employed have been laid off.

Mindful of the issues, he began to reach out to the partners to seek to resolve whatever differences existed, Gonsalves said, adding that the investors agreed to have a former head of the Toronto stock exchange who live in Canouan to be the mediator.

“… and without going into the details, I went to London to meet various persons, because Mr. Desmond is not the only new player in the investment. So I had to meet with another principal player and to hold discussions with them, I had to see them at different time, different days,” he said.

Gonsalves said Saladino could not come to London because of health reasons and he had to go to Switzerland to meet with him and his son.

“Because it is important for me to have all the persons aboard, and though all what has been agreed upon has not been put into writing, I think that it is safe to say that an agreement has been arrived at and we will shortly see a resumption of all of the activities both in the developed area and down at the marina,” Gonsalves said at the press conference.

He noted that his government own 17 per cent share in the marina area, and the shareholding is joint between the other equity partners.

“I don’t want to go into details, because that is not important. The important thing is to report, to give the assurance that we are working to sort the problems out, and I can report that I am satisfied that we have a solution in going forward.”

He said that marina being built is unlike any other in the southern and eastern Caribbean.

“And you can just think about the VAT (value-added tax), the employment, the income taxes, the various services which have to be provided.

“And remember this, you can leave your plane at the jetport in Canouan, with you knapsack on your back, and walk five minutes and you are on top of a yacht.”

Speaking of the impact of the development on the nation, Gonsalves noted that the EC$200 million supplementary estimates for the Argyle International Airport that parliament approved last year, included US$20 million related to the sale of 40 acres of land in Canouan just outside of the developed area.

The agreement was that US$5 million be paid on the signing of the agreement, and US$3.7 million every quarter thereafter.

The first quarterly payment was made on time and the one that was supposed to be made in November was made late because of the difference between the equity partners.

Only US$2 million has been paid and the US$3.75 million, which should have taken place in the first quarter of this year was not paid.

“So, we are being owed five and a half million U.S. dollars, and then another 3.75 million will become due toward the end of June.

“I have been advised that very shortly, the government would be receiving money from the developers in relation to agreement we had on the sale of those lands,” Gonsalves said.